The Independent Singapore News
Home News Featured News Woman pregnant with another man’s child asks if she should hold the...

Pregnancy the result of 'a moment of vulnerability', she says

A woman pregnant with another man’s child has turned to netizens for advice. She is asking whether she should tell the child’s father, or still remain with her current boyfriend.

In a post submitted on Sunday (March 7), a woman wrote that last month she found out that she was pregnant, but not with her boyfriend’s child.

Without revealing details about the child’s biological father, she refers to the pregnancy as “a moment of vulnerability”.

“I have been wrecked with guilt ever since”, she wrote.

Asking netizens for advice on what to do, she added that she was not keen on an abortion because “of the negative stigma around abortion and the whole process just really freaks me out, not to mention the financial costs involved”.

Also read: Woman asks if she should leave her “ugly” boyfriend because her ideal guy is at least 180 cm tall and earns $10k/month

An abortion can cost from $800 to $5,000, depending on whether the procedure is conducted in a restructured hospital (KK Women’s and Children’s Hospital, Singapore General Hospital, or National University Hospital), a private hospital, or a private clinic. Singaporean patients can use their MediSave accounts to subsidise the procedure.

“Should I tell my BF? Or should I just hold the father accountable and settle with him? I really love my BF though…”, the woman wrote.

Netizens took a vested interest in her story, with parents of daughters writing in to advise the woman.

Most angrily said that she did not deserve her boyfriend. Others told her not to go for an abortion, but to instead have the baby and give the child up for adoption.

Read on for advice, not for the faint of heart: 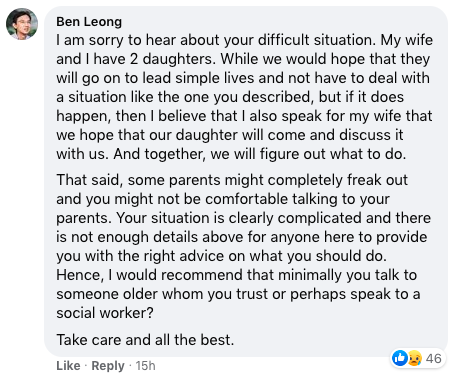