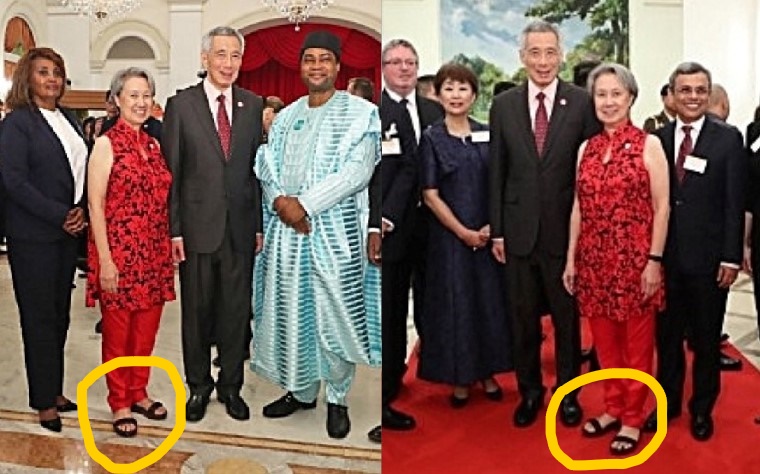 On Thursday (11 July), PM Lee and Mdm Ho made an appearance at the President’s Annual Diplomatic Reception 2019. The event, hosted by President Halimah Yacob at the Istana, was attended by nearly 300 heads of diplomatic and consular missions, along with the representatives of international organisations and their spouses.

PM Lee published photos from the event on his Facebook page and said that the event was an important one, through which Singapore deepened its friendship with fellow nations. He wrote: “Many thanks to our guests for helping us deepen friendships with many countries, and helping Singapore shine a little brighter.”

He added: “The Reception is always a festive affair as many guests come dressed in their national or cultural outfits!”

Like many of the men present at the event, PM Lee wore a suit while he wife wore a red cheongsam top with matching red pants. Netizens, however, noticed that Mdm Ho chose to pair her festive outfit with her signature open-toed sandals – a choice of footwear that many feel is inappropriate for such an event.

Writing on the Facebook group United Singapore, model Elisa Boon noted that Mdm Ho – who is the chief executive of Singapore sovereign wealth fund Temasek – stood apart from the other women at the event who wore appropriate covered shoes.

Asserting that wearing open-toed shoes to such events is a strict etiquette no-no, Ms Boon wrote: “When I was modelling, we were taught how to dress, behave and professional etiquette. And for shoes, usually basic rule “Keep it neutral, keep it classy, keep it covered”.

Several netizens echoed Ms Boon’s distaste for Mdm Ho’s choice of footwear and wondered why the wife of a head of government and leader of a sovereign wealth fund would persistently wear inappropriate sandals despite repeated criticism:

This is not the first time Mdm Ho has worn inappropriate footwear while accompanying her husband at official events and state visits. Time and time again, Mdm Ho’s open-toed sandals have irked Singaporeans who criticise her sense of style as “sloppy” and “disgraceful”.

She had sported open-toed sandals at an official US visit back when Trump’s predecessor Barack Obama was in office as well. Netizens were quick to point out the difference in dressing between former US President Barack Obama’s wife, Michelle Obama and Ho Ching, when PM Lee and his wife were invited to a state dinner at the White House.