Tan Cheng Bock 'still a decent man and my friend, even if we do not see much of each other now' 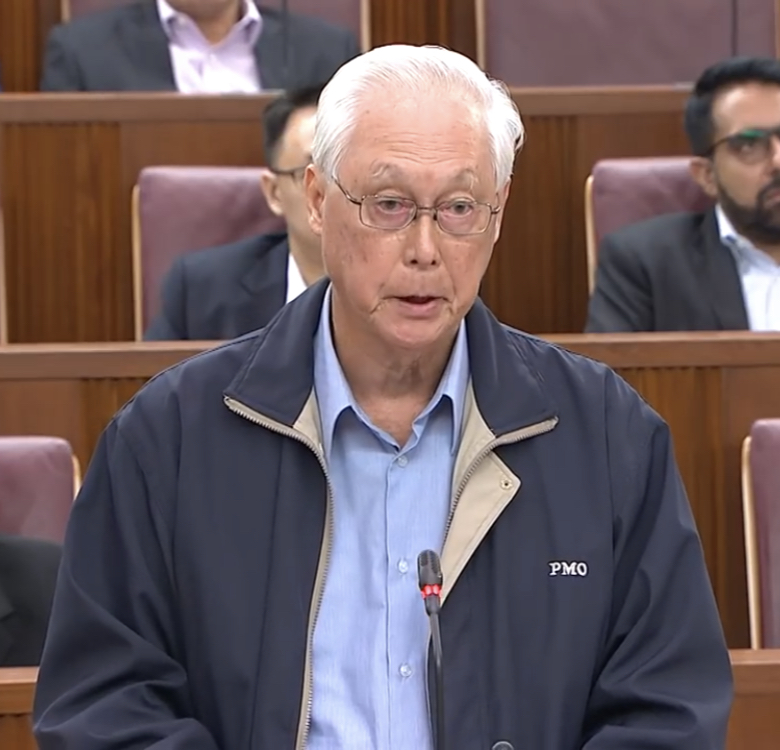 In the second volume of his biography, former Singapore Prime Minister Goh Chok Tong revealed his soft spot for two former stalwarts of the ruling People’s Action Party (PAP), the late Ong Teng Cheong and Mr Tan Cheng Bock, even though these two men opposed the PAP after leaving the party. In the book, Standing Tall, Mr Goh expressed warmth and admiration for these two men whom he called friends, in contrast to his dislike for opposition politicians Chee Soon Juan and Tang Liang Hong.

The book, which details Mr Goh’s tenure as Prime Minister from 1990 to 2004, hit the bookstores earlier in May. It is a sequel to the first volume, Tall Order, which covered Mr Goh’s youth, working life and earlier political career.

In the book, Standing Tall, Goh spoke of the late Ong, “I will always remember him fondly as a friend, and respect his significant contributions to Singapore.”

Ong was Deputy Prime Minister from 1985 to 1993 and President from 1993 to 1999. During his tenure, the President’s role was mostly ceremonial, but he had the power to check the national reserves. Ong exercised that right, which put him at loggerheads with his former party and the civil service.

After Ong asked for information on the reserves, the Government stonewalled him for three years, he said in an interview with Asiaweek magazine on March 10, 2000.

“Yes, I was a bit grumpy. And maybe not to the liking of the civil service. They did not like what I said. But I have to be a watchdog all the time, you see,” Ong told the now-defunct Asiaweek.

“If they regard that as an attack on the Government and on the civil service, then that is for them to interpret,” Ong added.

Mr Goh knew Ong was frustrated in his job as President. Ong had complained to him and he tried to explain the bureaucrats’ actions, according to Standing Tall written by Peh Shing Huei, a former journalist of The Straits Times, Singapore’s main newspaper.

“The officials might have thought he was troublesome. But he was ‘troublesome’ in a good way. As the PM (Prime Minister), it did not bother me because he was testing this new system we had just constructed, and this was a good thing,” Mr Goh is quoted as saying in Standing Tall.

On July 16, 1999, Ong held a press conference announcing he would not seek another term as President and aired his problems in getting information on the state reserves, complaining some ministers and civil servants viewed him as a “nuisance”.

Mr Goh said he “certainly” never found Ong a nuisance, according to the book.

Two weeks after that press conference, on July 30, 1999, Ong’s wife, Ling Siew May, died of cancer. The Government decided she would have a private funeral, not a state funeral.

“I admit that it came across as petty and ungracious,” Mr Goh said.

After Ong died of cancer on February 8, 2002, the Government granted him a “state-assisted funeral”, which was lower in status than the state funerals accorded two other Singapore Presidents, SR Nathan and Wee Kim Wee. The discrepancy in the funerals drew attention, leading to letters to the mainstream media and a question filed in Parliament. The Government replied it was not feasible to set a formula for each President’s funeral.

“People are confused, some people are unhappy. I accept that,” Mr Goh admitted.

Lee Kuan Yew’s tribute to Ong on the latter’s death was telling. The tribute by Singapore’s first Prime Minister in February 2002 said, “Ong Teng Cheong’s greatest service to Singapore was as secretary-general of the NTUC (National Trades Union Congress).”

The late Lee’s statement that Ong’s greatest contribution was as leader of the national labour confederation, without mentioning Ong’s tenure as President, spoke volumes, indicating his displeasure at Ong’s Presidency.

Mr Goh said of Ong, “We were good friends, we had no problems personally. But in the eyes of the people, how was it that the President and the Government were having clashes? That is my regret.”

Goh is also friends with another former PAP comrade, Mr Tan Cheng Bock. After 26 years as a PAP backbencher from 1980 to 2006, Mr Tan ran in the presidential elections in 2011 but narrowly lost to Mr Tony Tan. Mr Tan hoped to run for President again in 2017 but was blocked due to a new rule reserving the 2017 Presidency for Malays, paving the way for Madam Halimah Yacob, a Malay woman, to become Singapore’s current President.

“Cheng Bock was a close friend. I knew him from school and we had gone for holidays together,” Mr Goh told Mr Peh.

While Mr Goh supported Mr Tony Tan for President in the 2011 elections, Ms Goh’s wife voted for Mr Tan because she thought he was “more personable”, Mr Goh revealed, adding he did not influence his wife’s vote.

If Mr Tan Cheng Bock had run against Madam Halimah Yacob in the presidential election in 2017, he would have beaten her, because he lost to Mr Tony Tan in the 2011 election by only 7,000 votes, Mr Goh said.

Since Mr Tan Cheng Bock co-founded an opposition party, the Progress Singapore Party (PSP), in 2019, Mr Goh practised “social and political distancing” with him, according to the book. Nonetheless, on March 27, Mr Goh posted on his Facebook a photograph of himself with Mr Tan in a reunion recalling the days when both were scouts in school.

If Singapore’s next-generation leaders cannot campaign successfully against Mr Tan Cheng Bock’s party, “then I worry over how they will be able to take on nasty opponents in future”, Mr Goh said.

“Whatever Tan Cheng Bock’s present political motives are, he is still a decent man and my friend, even if we do not see much of each other now,” he added.

In the second volume of his biography, Mr Goh had unflattering things to say about Mr Chee Soon Juan, the secretary-general of the Singapore Democratic Party (SDP).

Mr Chiam See Tong, a former leader of the SDP, was not as shrewd as Mr Low Thia Khiang, a former head of the Workers’ Party, Mr Goh recalled. “During the hustings, he (Chiam) proudly proclaimed that he had brought a well-qualified academic into his party. This candidate, Dr Chee Soon Juan, with a PhD in physiological psychology from the University of Georgia, boasted that he had ‘a good brain’.”

When Lee Kuan Yew read this in the newspapers, “he laughed”, Mr Goh disclosed.

“Chiam paid the price for his bad judgment of Chee. Chee subsequently outmanoeuvred him and kicked him out of the SDP,” he added.

During the general elections in 1997, Mr Goh accused Mr Tang Liang Hong, a Workers’ Party politician, of being a Chinese chauvinist, which Mr Tang denied. During that election, Mr Tang filed police reports alleging the PAP’s accusations against him could cause extremists to harm him and his family.

Shortly after the elections which Mr Tang lost, 11 PAP politicians including Mr Goh, Lee Kuan Yew, his son, Mr Lee Hsien Loong (the current Prime Minister), and Mr Tony Tan sued Tang for defamation, alleging he had questioned their integrity. Default judgements against him ultimately totalled S$3.63 million (US$2.72 million) in damages. In addition, the Inland Revenue Department pursued him for tax evasion. Later in 1997, Mr Tang fled Singapore for Australia, where he currently lives.

If Mr Tang had got into Parliament, he might have made divisive statements while protected by parliamentary privileges, Mr Goh said. “Tang Liang Hong, he was our main concern.”

Mr Peh cited Reluctant Editor, a book by a retired Singaporean editor, Mr PN Balji, which said the police reports filed by Tang were faxed to The New Paper, a Singaporean tabloid, which published them on its front page the next day. This high-profile coverage was used in the libel lawsuits against Mr Tang. Mr Goh told Mr Peh he did not transmit those police reports to The New Paper and never asked Lee Kuan Yew to do so.

Goh answered, “That is your conclusion.”

Magnanimously, Mr Goh said if he was still Prime Minister, he would say to Mr Tang, come back anytime.

Thus, this book shows Mr Goh does not nurse long-standing vindictiveness against people who opposed him or his party, whether former party comrades or opposition politicians.