Sharing photos of himself and ex-Foreign Affairs Minister George Yeo at the Lunar New Year Reception 2019 at the Istana, Emeritus Senior Minister Goh Chok Tong announced on Thursday that “George Yeo is back with the Aljunied Team! He is fighting fit.” 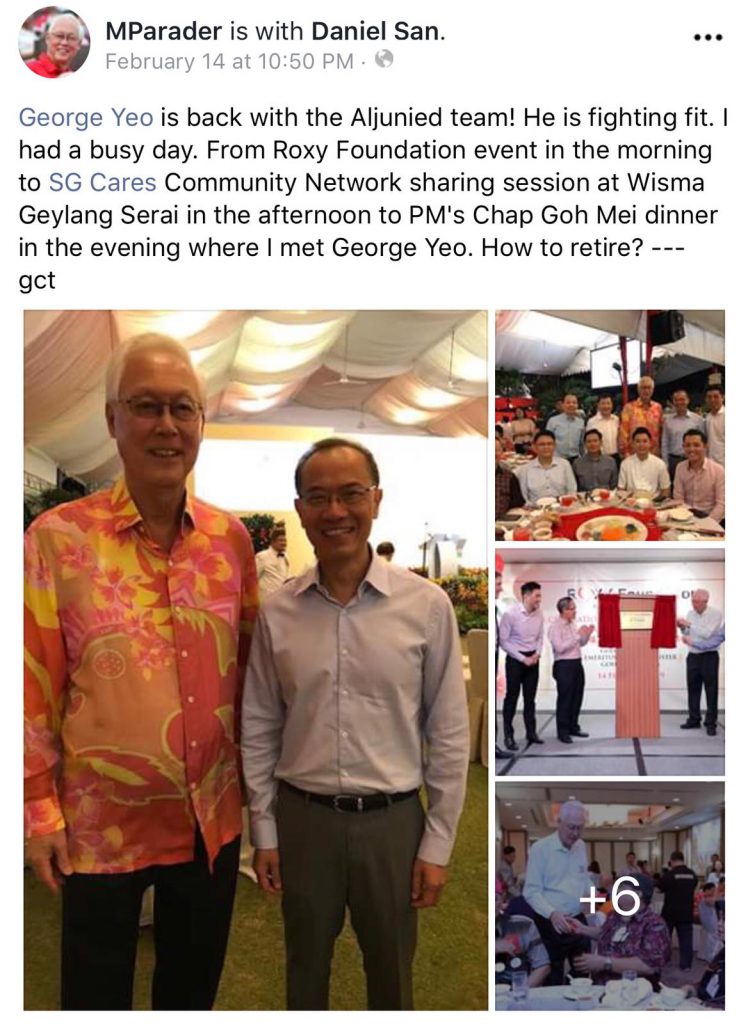 On why he made an appearance at this year’s dinner when he has been absent at the annual dinner in previous years, Yeo responded: “This is my first time to attend this dinner because it was held earlier this year. Tomorrow, I will fly to Hong Kong.”

So was ESM Goh’s Facebook post simply misread by the majority of netizens? Or did he deliberately mean to tease the people? The Chinese daily implied that ESM Goh may have meant to tease the people. It reported that Goh “knows how to tease people with words.”

In the same post where he announced that George Yeo is back with the Aljunied team, ESM Goh described his busy day and asked how he can retire. He wrote: “I had a busy day. From a Roxy Foundation event in the morning to SG Cares Community Network sharing session at Wisma Geylang Serai in the afternoon to PM’s Chap Goh Mei dinner in the evening where I met George Yeo. How to retire?”

Highlighting ESM Goh’s note that he is too busy to retire, the Chinese daily pointed out that: “There have been rumors that the 78-year-old Goh Chok Tong may have to retreat and not participate in the general election.”

The daily added that it is unclear whether ESM Goh will lead Marine Parade GRC in the next election or whether he will be lifted out of the constituency. It wrote: “What will be a matter of some curiosity is whether in the coming general election, will Goh still hold the base camp of the Marine Parade?”Follow us on Social Media