Singapore — A young woman earning twice as much as her boyfriend considers the finance issue “a touchy spot that we cannot reconcile”.

She polls netizens on whether she should be worried about the income gap.

In a post submitted on Thursday (Mar 11), a woman in her mid-20s wrote that she and her boyfriend have been together for two years and are thinking of getting married.

The problem, she says, is the “big income gap” between them.

“I am earning 5k in a stable job and he is earning average 2.5k as a financial consultant,” she writes, noting that last year due to Covid-19 there were months when her boyfriend had to dip into his savings, leaving him with probably less than S$10,000 in the bank.

Though she loves him with all her heart, “when it comes to money issues, I can’t help but feel it is a touchy spot that we cannot reconcile”, she adds.

“But when we are talking about marriage, I can’t help but to freeze up. The ring, the banquet, bto deposit, renovation, furniture. We are easily talking about 6 figure spending. How the heck are we able to afford all this?” she writes.

Also read: Woman pregnant with another man’s child asks if she should hold the father accountable or still remain with her boyfriend

Admitting she did not have it in her to pay for everything, she states: “Maximum I am willing to contribute is half of everything, but I know that at this rate, he won’t be able to afford his part of the half”.

She has “hinted to him about his earnings”, she writes, but her boyfriend has insisted on carrying on with his job due to his bond with the company. Covid-19 was just a “rough patch”, he says.

Netizens did not take kindly to her. If she was not prepared to make sacrifices, she was not in love, said one. True love is not love based on financial security, said another. 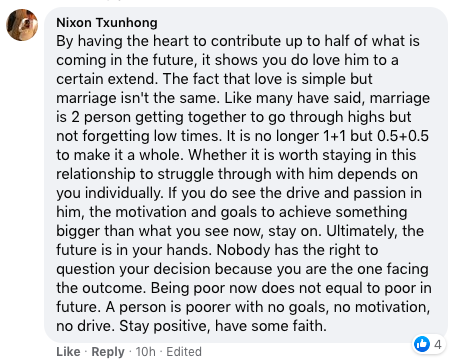 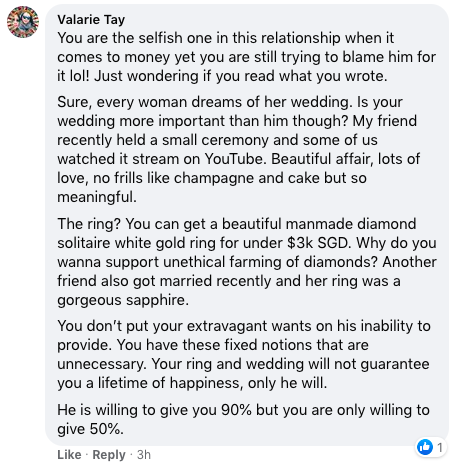