The Independent Singapore News
Home News GE2020: SDP's Paul Tambyah, "We can all hold our heads up high"

"As I said before, it would be a miracle if we get in, but unfortunately, the miracle did not happen." said the globally-renowned infectious disease specialist and chairman of SDP

Singapore—While the Singapore Democratic Party (SDP) failed to win any of the seats where it contested in this year’s General Election on July 10, party chairman Paul Tambyah and Secretary-General Chee Soon Juan have said that the party will come back even stronger in future.

Dr Tambyah, a globally-renowned infectious disease specialist, told the media after the election results had come in, “We can all hold our heads up high.”

This year the SDP contested a total 11 seats and received a total of 110,827 votes or 37.04 percent of votes in contested seats.

The Single Member Constituencies (SMCs) where SDP’s leaders had contested had been very close races indeed. At Bukit Panjang, where Dr Tambyah had gone head to head with PAP’s Liang Eng Hwa, Mr Liang had won 53.74 of the vote, while at Bukit Batok, PAP’s Murali Pillai won 54.80 percent of the vote, besting Dr Chee.

Dr Tambyah, the first Singaporean to become president-elect of the International Society for Infectious Diseases, also told the press, “We’ve done a strong campaign considering the circumstances. As I said before, it would be a miracle if we get in, but unfortunately, the miracle did not happen. But we’re grateful for the experiences and as Dr Chee said, I’m sure we’ll do better the next time.”

The circumstances Dr Tambyah was referring to was the holding of the election amid the coronavirus pandemic, which he, along with Progress Singapore Party’s (PSP) Dr Tan Cheng Bock, also a physician, had spoken up against.

He told the press early on Saturday morning, “As you’ve heard from me many times before, this is a crisis election that was called during the pandemic.”

Dr Tambyah remarked on the “recklessness and opportunism of the PAP in holding the campaign in the middle of a pandemic,” but added, “nevertheless we deal with the cards that we’re dealt with and we’re really grateful to the voters who supported us.”

Thanking their supporters and vowing to improve on their performance, Dr Chee said, “We ran a very good campaign that was focused on policy and on the issues. Unfortunately, we came up short. We want to tell the voters…that we’ll continue to press on.” 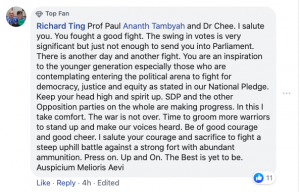 Some even said that the election results were encouraging, and urged the leaders to keep on, especially for Dr Tambyah, who had contested for the first time in Bukit Panjang. And while it was the second time for Dr Chee to run for the seat at Bukit Batok, his results were better than they were in the by-election of 2016, when he had only won 38.77 percent of the vote.