Woman in mall without mask: Individual criticised for posting video

Many say she could have been politely reminded to wear one

Singapore — An individual who posted a video of a woman walking around a mall without a mask has been criticised for shaming her.

The Facebook user had uploaded the video on Thursday (April 30) on the All Singapore Stuff, an online page where just about anything Singapore-related is shared.

The amateur video clip, which is 19 seconds long, featured a woman casually walking around a mall. The caption pointed out that she was not wearing a mask and wondered why the mall security was not doing anything about it.

Posted by All Singapore Stuff on Wednesday, April 29, 2020

Singapore required masks to be worn in markets, convenience stores, pharmacies, and shopping malls from April 12.

While the individual’s intention was to draw attention to the woman’s disregard for the rules, he found himself criticised for what he did.

Many of those who responded to the post said that, instead of putting the video on social media, the person concerned could have just politely reminded the woman to wear a mask.

However, Facebook user Gary Goh sympathised with the individual, arguing that there have been a number of cases of people being told to wear masks but who do not listen and scold those who approach them.

On the other hand, there were those who wondered why it was necessary to put the video on social media.

Others called for people to be more gracious, understanding, and considerate with regard to such incidents. 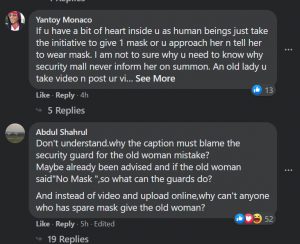