The Independent Singapore News
Home News Featured News Was Goh Chok Tong referring to the WP as "pesky birds" in...

Was Goh Chok Tong referring to the WP as “pesky birds” in Marine Parade?

Netizens have speculated that Mr Goh's comment could be directed at the WP, since he has called them "birds" in past comments referring to their presence in his Marine Parade GRC ward

Eagle-eyed observers have interpreted a recent comment Emeritus Senior Minister (ESM) Goh Chok Tong made to perhaps be a dig against the Workers’ Party (WP).

On Sunday (12 Jan), ESM Goh published a few photos of himself posing next to a scarecrow and wrote, “Wonder if he could stand in Marine Parade and scare off pesky birds.”

Some netizens pointed out that Mr Goh’s comment could be directed at the WP, since he has called them “birds” in past comments referring to their presence in his Marine Parade GRC ward. In a Facebook post published in September 2017, the former Prime Minister wrote:

“So, Workers’ Party have migrated to a new nest in Marine Parade constituency. Though birds of a different feather do not flock together, we welcome them as our new residents. They will like it here. It is well-managed. Come to my MPS if you have issues.”

There is speculation that Mr Goh may be referring to the WP as the “pesky birds” in his most recent Facebook post, especially since the WP has been regularly walking the ground at Marine Parade GRC as the next General Election looms. 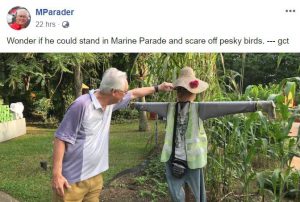 ESM Goh has a reputation for making jibes about his political rivals on social media. Some of his past Facebook comments appeared to make pointed remarks about members of his own party, like founding Prime Minister Lee Kuan Yew, his son and current Prime Minister Lee Hsien Loong as well as fourth generation ruling party politician Chan Chun Sing.

Mr Goh has also openly hit out at his longtime friend Tan Cheng Bock after Dr Tan left the ruling party to form his own opposition party. In one post, he said that Dr Tan seems to have “lost his way” and in another Facebook post, he commented that Dr Tan’s Progress Singapore Party seems to be “eyeing” his Marine Parade ward.

Despite ESM Goh’s persistent attempts at putting down someone he once described as his “very close friend,” Dr Tan has maintained a dignified silence and has refused to talk about Mr Goh, whom he has been friends with for nearly 60 years.

When reporters asked Dr Tan about ESM Goh’s comments that he has “lost his way”, Dr Tan asserted: “I will never talk about my friend in public. That’s my answer. I won’t go into that as respect for my friend.”

While Mr Goh is protective of his constituency, rumours are rife that he may be lifted out of Marine Parade GRC during the next General Election. The Chinese daily reported last year: “There have been rumors that the 78-year-old Goh Chok Tong may have to retreat and not participate in the general election.”

Interestingly, rumours that 78-year-old Mr Goh will be phased out in the next election continue to circulate in spite of the fact that Mr Goh’s predecessor, Singapore’s founding prime minister Lee Kuan Yew, remained an MP until his death at the age of 91.