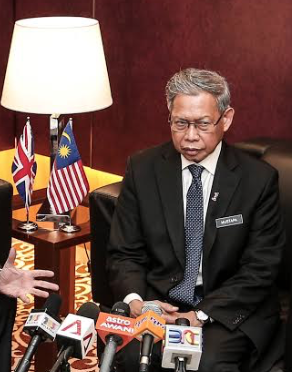 Malaysia is among the 16 countries labelled as “trade cheats’ by Trump in a recent statement and attributed this to be the reason for the US facing a trade deficit of almost US$50b.

Last week, Trump signed an executive order which he promised would stop “foreign importers that cheat”, naming Malaysia among other countries as a party to ‘trade cheat’.

Under the order, countries with large trade imbalances with the US will be closely scrutinised for a 90-day period while the administration holds talks with manufacturers, service providers, farmers and consumers to identify problems.

However, Malaysia’s Minister of Trade and Industry Mustapa Mohamad said, following the allegation, his ministry had looked at all aspects of Malaysia’s trade, including figures which showed that the country had a surplus trade of US$6 billion with the US.

He said this was far below the US$50 billion figure provided by Trump, insisting Malaysia is not a trade cheat.

“As this (Trump’s statement) has become a public statement, Miti is preparing some facts to correct the allegation made by the US president.

“So we strongly deny that we are a trade cheat. We practise a free but fair trade.”

But the Malaysian anger stopped there, with the Minister not denying the importance of Malaysia-US ties, saying the US was an important trade partner.

“Even with the allegation, we are confident that our relationship with the US will continue to grow,” Mustapa added.