“Its very heartwarming. During his line of duty and due to Covid measures, he probably took the time to worship due to the bad weather," said Madam Ong who noticed the man in prayer

Over 13,000 netizens on Facebook have appreciated a viral photo of a deliveryman silently conducting his prayers at the void deck of a HDB block in Pasir Ris.

The photo was published on social media by Facebook user Ong Beng Lee, who spotted the deliveryman at the void deck of her block on Saturday (10 Jan) afternoon, around 1.30pm. Mdm Ong, who stays home taking care of her two grandchildren, said that she was going to a nearby shopping area when she “saw a very unusual sight at the void deck.”

Mdm Ong saw a man, dressed in a purple uniform that says ‘QExpress’, standing still at the void deck. She recounted: “At first I could not understand what was this man doing just standing there. As soon as I came closer, I realised he was actually worshipping. Not only that, I saw him still having his mask intact to his face.”

Pointing out that the man probably took shelter to pray since it was raining heavily, Mdm Ong said: “Its very heartwarming. During his line of duty and due to Covid measures, he probably took the time to worship due to the bad weather.”

She added: “As a person of a different race, I find this not disturbing or nuisance at all cause we should understand and respect other races belief cause we ourselves holds funerals at void decks. Young man, you have my admiration as long as I live.” Mdm Ong’s beautiful message and the photo she posted drew thousands of likes online, with netizens admiring the young man and the grandmother who appreciated him. Read the top comments here: 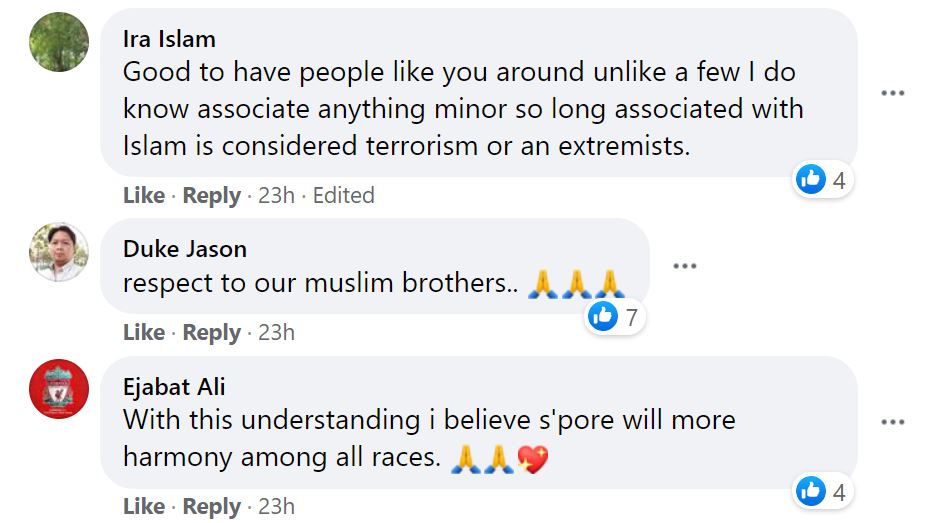