The Independent News
Home News Featured News Photo of cabbie kneeling and begging traffic wardens not to summon him... 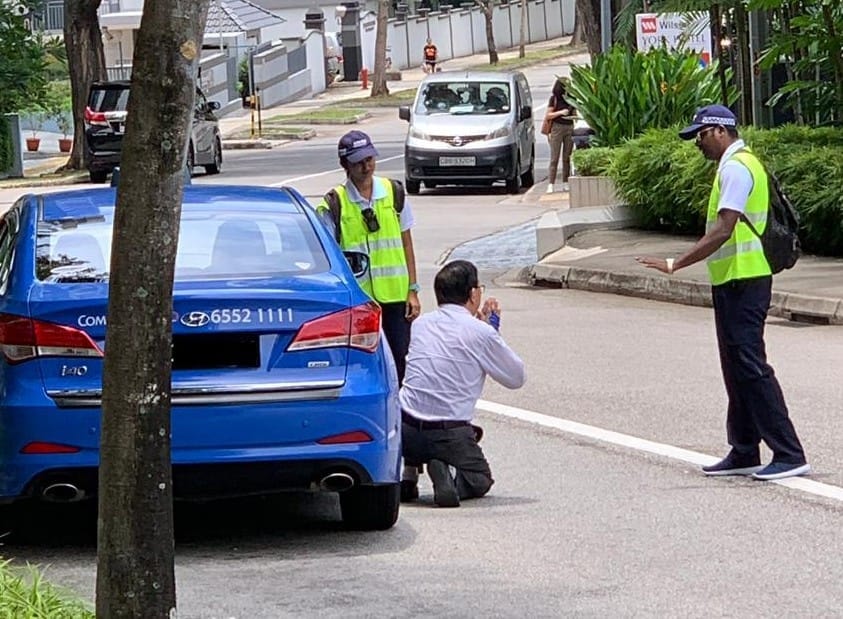 Update: In response to media queries, the National Environment Agency said it was aware of the image and clarified that the cabby had been given a fine after he was caught smoking in his taxi.

The NEA said in a statement: “NEA is aware of an image circulating online of a man seen pleading for leniency from NEA officers.

“NEA confirms that on 3 October 2019 at about 12.30pm, a male driver was caught smoking in a ComfortDelGro taxi with the windows wound down along Mount Elizabeth Road.

“The officers notified the driver of the offence before issuing him a ticket of $200 for smoking in a public service vehicle.”

An image taken of a cabbie kneeling down and begging parking wardens not to issue him a fine has been making its way around the Internet, going viral.

In the photo, a man can be seen pleading on his knees with two parking wardens with his hands placed as if he were praying.

His cab, a ComfortDelGro taxi can be seen parked alongside a single unbroken white line, along a two-lane road.

Aingle white line indicates no parking at all times on both sides of the road. This line is usually used to separate a wide road with 2-way traffic.

Many netizens were sympathetic towards the man, and one alleged that they had just spoken to him.

Last month, a video clip showed enforcement officers in the Orchard Road precinct near 313 Somerset, appearing to be taking down a person’s details, allegedly for smoking with just one foot out of the designated smoking area.

It is also unclear if the men in the video were actually fined by the NEA. /TISG