The designated smoking zone was marked out by faded and unclear yellow boundary lines, visible in the video 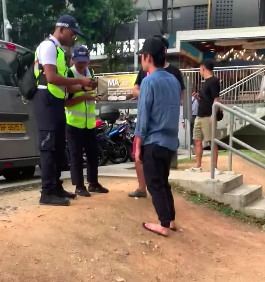 It has been nine months since Orchard Road was officially declared a No Smoking Zone, National Environment Agency (NEA) officers have stepped up their punishments, meting out harsher sentences. Earlier today, a video circulated of NEA officers talking to smokers standing just outside a designated yellow box, the lines of which looked to be faded.

Earlier this year, the NEA said that they would only be issuing verbal warnings in the No Smoking Zone for the first three months of the year and issue tickets or fines only after that.

This was to give the public time to get used to the new law, which is why their approach to smokers on Orchard Road was at first advisory. Last year, there were around 22,000 tickets issued for smoking in forbidden spaces.

In the video uploaded online by user Li Mingjin, accompanying it with a caption that reads: “they’re catching puffing outside the yellow box”.

The clip shows enforcement officers in the Orchard Road precinct near 313 Somerset, appearing to be taking down a person’s details. 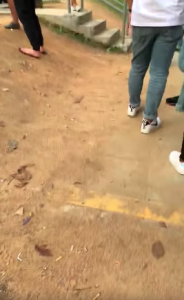 It is also unclear if the men in the video were fined by the NEA.

Last year, a netizen and smoker took to Facebook earlier today to warn other smokers of the National Environment Agency’s (NEA) officers patrolling to catch those smoking in prohibited areas. The man was caught and issued a fine for smoking ‘between the 7th floor and 8th floor’ of a Housing Development Board (HDB) block in Toa Payoh.

In his Facebook post, the man shared a copy of his fine, where he had to pay a whopping S$200 for his offence.

According to the fine, the man was caught at 10.14pm and Singaporeans were very surprised at the efficiency of NEA officers. /TISG