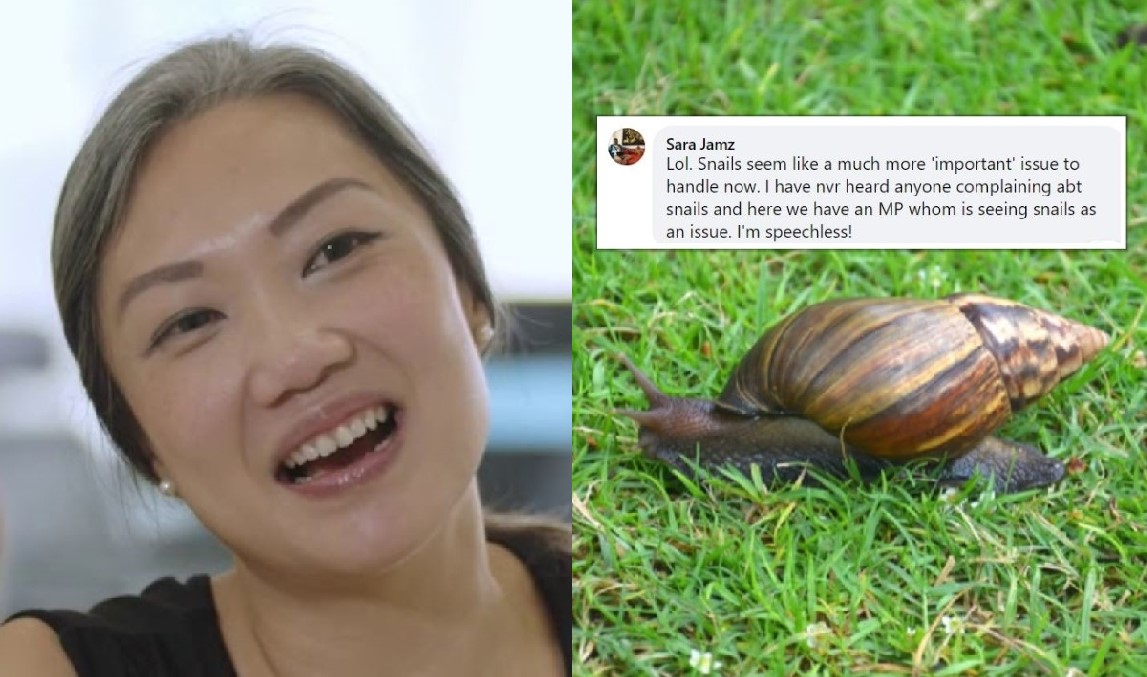 New People’s Action Party (PAP) parliamentarian Carrie Tan has drawn criticism online for being too concerned about snails in her ward.

Not when there are other issues residents seem to want her to focus on.

On Saturday morning (26 Sept), the Nee Soon GRC MP says on Facebook she met with her town council and their horticulture contractor earlier in the week.

The reason was to find solutions for the “snail problem” in some of the HDB estates under her purview.

The snails leave “slimy paths” which are a “nightmare” for the town council cleaners to deal with says Ms Tan wrote.

“This week I had a meeting with Town Council and our horticulture contractor to discuss natural ways to solve the snail problem in some of our HDB estates.

“It turns out snails like to breed in areas that have shade and moisture, and some of the landscape vegetation we have happen to create the ideal conditions for them. They create slimy paths which is a nightmare for our cleaners to clean ?”

She adds that it has been a challenge to find aesthetically pleasing plants that do not attract snails and that do not cost too much, since it needs to fit the town council budget.

“It’s a challenge looking for nice looking plants to fulfil multiple conditions we are seeking, and yet can thrive in shady, rather sun-less spots, and which fits the budget and don’t cost too much.

“And doesn’t encourage snail breeding. But I don’t think it’s an impossible challenge. Any plant experts in our community who have suggestions? ?”

Some netizens chimed in with their suggestions. But the majority of Facebook users commenting on Ms Tan’s post criticised her for being so concerned about snails.

Some said that the snails are a part of the ecosystem and should not be removed. Others asked the MP why she is devoting so much time to this issue when there are other concerns, like cockroach infestations and issues with serviced lifts, that need attention. Ms Tan took notice of the criticism and edited her post to add that the other problems the netizens raised are being looked into.

“Thanks for the lively discussion – looks like there’s a diversity of opinions! Rest assured that other pest problems are also being looked into, including litterbugs…

“We are looking at long term education projects. Cars with illegal modifications causing noises are also being looked into by relevant agencies. Thanks for sharing!

“If you have specific cleanliness issues at your block that have not been remedied despite feedback, do drop me an email at CarrieTanNSS@gmail.com”

Lee Bee Wah draws flak even though she has both PAP and WP MPs in splits with her complaints about snakes, rats and cat-feeders

‘Catty’ comments not funny at all, Cat Welfare Society strikes back at Lee Bee Wah