The Independent News
Home News Featured News Lee Bee Wah's own resident points out that rat problems in the...

Human beings throwing rubbish about is the problem not cat food A resident in Nee Soon GRC MP Lee Bee Wah’s own ward has pointed out that the rat problems in the area is from rampant food being littered by humans – not from cat food that is set out, like Lee claimed in Parliament last week.

Last week, Lee Bee Wah lamented the presence of “big, big rats” running and “dancing about” in her ward and blamed the cat-feeders in the community for giving rise to such pests as she claimed the rats eat the food set out for the cats.

Lee said that she had mobilized the town council, the National Environment Agency (NEA) and the Agri-Food & Veterinary Authority of Singapore (AVA) to form a “Rats Task Force” but the task force could not eliminate the root cause of the issue.

She said: “I asked NEA to act. They said, ‘cannot. There was a agreement by NEA and Cats Society [sic] to leave food there for two hours.’ So…how to solve the rat issue?”

Several Singaporeans blasted Lee for advocating action against community cats and cat-feeders instead of addressing the root cause of littering that gives rise to rats.

This past Saturday, a Nee Soon GRC resident shared photos showing the filthy state of the Khatib area and pointed out that root cause of rat problems in the area is widespread human food litter.

The resident, Facebook user Jennifer Lee, wrote that she took a stroll in her neighbourhood around midnight “found no trace of cat food hanging around. Instead, all I found was human food left everywhere in the estate. This leftover food will remain where it is, till the workers clean up the next morning.”

Accusing Lee Bee Wah of “turning a complete blind eye to the root of the problem,” Jennifer asked: “Surely, one who sees and complains about the tidbits (cat food) can’t be completely blind to the actual buffet (human food)?”

Jennifer shared the following photos showing the human food left out in her neighbourhood: Jennifer said that the photo above shows “the “dancing rats” [Lee Bee Wah] was talking about. Four, having a buffet of leftover fruits…Two rats ran off when they saw me. There were four in this basket.”

Jennifer wrote that this photo above shows a “large group of people gathered at a void deck. Surrounding them were drinks and bags of leftover food strewn all around them. This was not the only gathering of people I saw in my walk.” 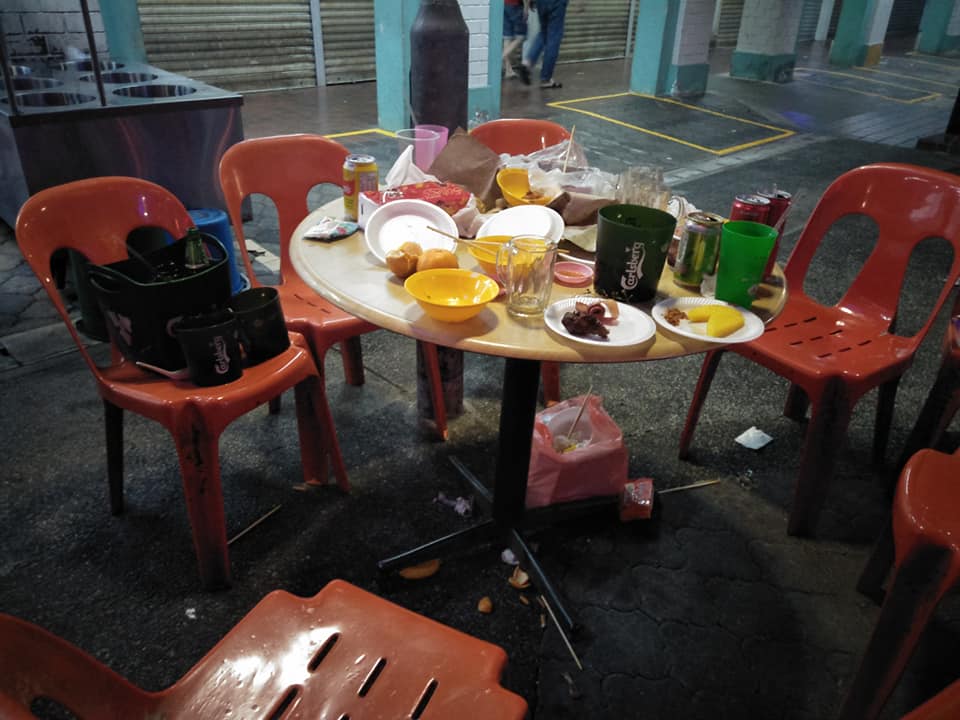 This next picture above shows food littered at a neighbourhood coffeeshop. Jennifer asked: “Post closing time. Who’s there to clear all these?” Sharing the picture above, Jennifer asserted: “With coffeeshop trash bins left open like this, it’s no question why there are the cockroaches like Dr Lee mentioned.”

Jennifer also shared a picture of food offerings left out as part of religious rituals. Noting that such offerings “will only be removed the next day,” she shared that “this is one of many around the neighbourhood, and some have much more food than pictured.”

“Buddhism is one of the most progressive religions I have known. It embraces compassion. In progressing, true Buddhism even encourages electronic burning of incense during 7th month instead of burning actual paper. True Buddhism seeks to change and improve with times, with the environment in mind.

“Hence my question here is, whether there may be better ways of managing this, while keeping the practice.

“What Dr Lee can / should do is to talk to religious organizations and find ways to better the practices. Eg. We have progressed from burning incense in our personal incense bins at our door steps to burning it at allocated burning areas.

“Buddhism itself has progressed from selling incense papers to educating people to burn less or not burn at all by using their electronic burner.

“If no one has the guts to talk about these issues, there will never be improvements. It’s not to kill the practice but to improve the practice. How about allocating a space for offerings to be placed n having them cleared at let’s say 12am daily? I’m not religious and hence I’m just throwing this as a casual recommendation. I’m not sure what works best but there are definitely solutions out there if we bother to work on them.” Jennifer concluded her post by asserting that “turning a blind eye” to the bigger problem will not help in resolving the core issue. She also urged the authorities to exercise compassion when it comes to managing animal issues and called on Lee Bee Wah to help residents “nip the problem in the bud.”

“As long as we pretend to be blind to the bigger problem, killing rodents and calling pest control for pythons (natural predators of rats) will only remain a short term solution to a long term problem. It’s pointless whining about having to wipe the spills without bothering to stop the leak.

“I question our choice of actions in managing the animal issues. These are sentient, feeling beings with nervous systems that allow them to feel pain just like us. Is it right for rats or any animals persay to be killed non-stop, year on year, en masse in the hundreds and thousands, just because we can and have the funds to – while we turn a blind eye to the actual problem? If pest control is so effective, why are we still facing a rat problem today? Perhaps, we should also place considerations in exercising compassion in our daily lives. Our MP should be helping us nip the problem in the bud.”