Netizens say Beow Tan and Tan Boon Lee are a ‘match made in heaven’, create Tinder match-up page for them

Netizens think they were made for each other 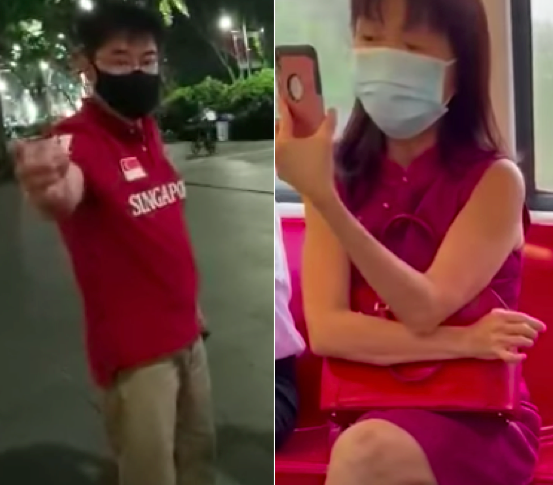 Singapore — Thy pet peeve’s pet peeve is thy… Date! Hard-on-the-minorities Beow Tan and Tan Boon Lee — two of the most widely publicised figures to feature in recent racially-charged incidents — are said to be a “match made in heaven” by netizens.

Both have got into hot water for berating the minorities and share not only the same prejudice but — alamak! — the same surname!

If that doesn’t make them the most compatible of couples, they certainly come close in the opinion of netizens who consider them a perfect match.

Online, people have even created a dating-app match-up page for them, much like the one seen on Tinder.

The image, created by popular Facebook page NUS – No Use Singapore, showed photos of Beow Tan and Tan Boon Lee side by side, with the words “It’s a Match!” above.

Netizens also referred to them as Mr Poly and Mrs JC.

In case you have been living under a rock and missed it:

Mrs JC: Catherine Beow Tan is infamous for harassing non-Chinese people on the MRT with racist vitriol. In many videos, she was seen belittling strangers she assumed were Malay while telling them that she was from the elite Hwa Chong Institution. In other videos, she was even seen harassing police officers at an MRT station.

Mr Poly: Tan Boon Lee got his five seconds of fame after he was seen berating an Indian man for being in a relationship with a Chinese woman. Throughout the video, Tan kept insisting that one Dave Parkash, a Singaporean who is half-Indian and half-Filipino, should date an Indian, instead of his girlfriend who is half-Chinese and half-Thai.

Tan got his nickname as Mr Poly after it was found that he was a lecturer (now suspended) from Ngee Ann Polytechnic.

Read related: Man says it is ‘racist that Indians marry Chinese because it is predatory’ in viral video