In a Facebook post on Saturday (Sept 26), Mr Baey mentioned that he was approached by a 19-year-old resident who is undergoing hormone replacement therapy.

Inviting his followers to tune in to his IG Live Chat to listen to the resident share about his journey, Mr Baey used the hashtag ‘#LGBT’ and wrote: “Keegan is a 19-year old Tampines resident who is undergoing hormone replacement therapy.

“Several months ago, I did a shoutout for residents to join my IG Live Chat to share something interesting about their life, passion or experience. It was courageous of Keegan to approach me offering to talk about his journey of becoming Keegan. Join us at 10pm tomorrow (Sunday).”

Mr Baey’s post drew considerable interest and had more than 700 reactions online in only a few hours. While the majority of those who commented on his post praised the MP, some felt that his post was merely a publicity stunt.

One person said Mr Baey had lost his vote by trying to be populist. Facebook user Jeff Law asked: “Are you raising this out of genuine concern for this person or are you trying to win popular votes?? Since when do we not empathise with the suffering??”

He said: “But to publicise this sounds like you are trying to be the first to gain popular vote. You just lost my vote here trying to be a populist! A PR man as usual!”

As a number of people came to his defence, Mr Baey himself responded: “Jeff Law just to set the record straight, Keegan approached me some months ago wanting to be on my Live Chat because he wanted to talk about his experience.” Others praised Mr Baey for being so progressive and inclusive of the LGBT community: 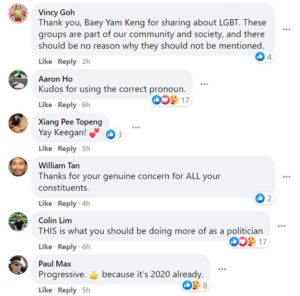 Keegan is a 19-year old Tampines resident who is undergoing hormone replacement therapy. Several months ago, I did a…