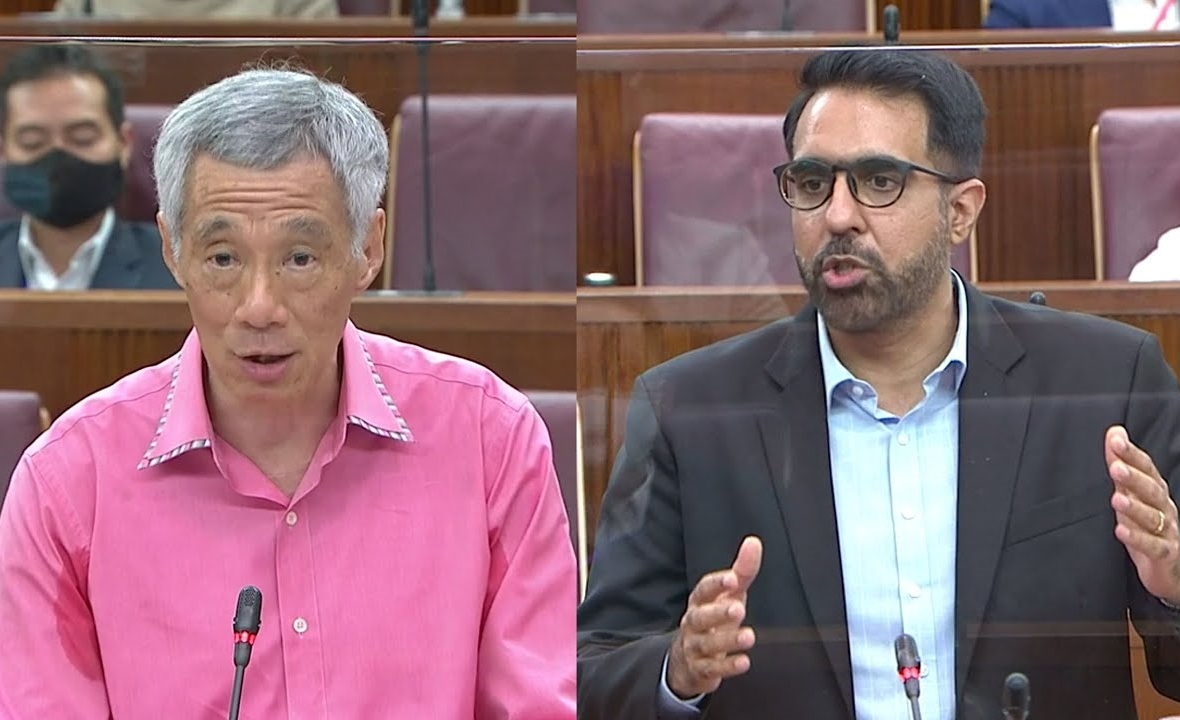 Mr Lee, who joined the debate on the President’s Address last week at the opening of Parliament, had made certain remarks that did not sit well with the Worker’s Party (WP) chief about how he thinks the opposition views the reserves and why he thinks some people vote for the opposition.

Mr Lee had, in a speech that was broadcast live, touched on how Singapore’s social safety nets should be paid for out of current revenues as a matter of principle — not from savings from the past or by mortgaging the future of the next generation.

He criticised the opposition for having the “attitude of inheritors who think they have come into a fortune”. He said:

“Now the opposition says: ‘Show me how much we have in the reserves, before I decide whether to support your Budget and tax plans’ … Basically they are asking: ‘I have something in the bank already. How much of that can I touch?’

“This was not the attitude of our forefathers, the founders who were building for the future. But the attitude of inheritors who think they have come into a fortune, and want to consume the fruits of their predecessors’ labours.”

Mr Singh took issue with Mr Lee’s view. He said: “When we talk about the reserves, we are not talking about raiding them. It’s about slowing the growth slope of the reserves, so the principal is not touched.”

He added: “And there is nothing unusual about this, because the PAP do it too. How so? In 2016, this House, including members of the Workers Party (WP), we agreed to include Temasek in the NIRC formula. Does that not reduce the growth of the reserves? It does.”

“So the argument cannot be that when the opposition tries to put that proposal forward, somehow we are engaging in some sort of chicanery to steal what previous generations have toiled and perspired over to bring us here.”

The WP chief stressed that the opposition has asked about the reserves since it looks for “alternatives to better consider the welfare of Singaporeans” and that Parliament gives them the “opportunity to do so”.

Responding that he was not arguing about the “technicalities of percentages, draw downs and NIRC,” Mr Lee said: “We do draw from the rainy day fund a certain stream of income to spend.

“We thought this over carefully, we debated this in the House, we agreed upon a rule, which we felt was a fair distribution between our present and future generations which is that of the expected earnings, half will be taken to spend, half will go back and be reinvested and will be for the future.”

The Prime Minister said Singapore should provide for the future generation and that this is the mindset that has brought Singapore to the place it is in, and will “serve our children and grandchildren well”.

In his speech, Mr Lee recounted that Senior Minister Teo Chee Hean had told him about a resident who was left “perturbed” because her friends encouraged her to vote for the opposition since “the Government would still be in charge”.

Calling those who vote for the opposition in the hope that others will re-elect the Government “free riders”, Mr Lee asserted:

“If you say vote against the Government because somebody else will look after getting the PAP Government and you just become a free rider, and you vote opposition, no harm, the PAP will still be there, then I think the system must fail.

“Because the system can only work if people vote sincerely, honestly, in accordance with what they really want, and to produce the result, which matches their true intentions, and if they vote tactically, the consequences must be one day, they will get the result, which they mark the x for, but which they did not intend.”

While Mr Lee held that this was the wrong thing to “teach people”, Mr Singh strongly opposed the Prime Minister’s view. He said: “I don’t think the residents of Aljunied, Hougang for 30 years now, and even Sengkang, as a result of the results of the last election, would appreciate being called free riders.”

Asserting that voters cast their ballots for the opposition because they “know an opposition in Parliament is ultimately good” for Singapore, Mr Singh said: “We are not just doing nothing, having been voted in. We are not just letting the other guy, the government of the day, do something.

Mr Lee responded that he did not undervalue the opposition leader’s “motivations, his passion, his desire to do right by Singapore”.

He said: “I think it is good for Singapore that you have honest people in the opposition, people who believe in what they are trying to do. People who will stand up and fight for their ideals and, from time to time, disagree very strongly with the government. I think that is entirely reasonable.”

While Mr Lee said that it was good to have an opposition who takes town council duties seriously and who take good care of their wards, he was firm on his view about free riders. Asserting that voters will end up with a government they do not want if everyone votes for the opposition thinking someone else will vote for the ruling party, he said:

“But if you say, vote for me, somebody else will vote for the PAP, and therefore the PAP will be the Government, that the economists will call a free rider. It means that you are taking advantage of somebody else who is doing their duty of electing a government for the nation.”

The notion that voters could end up with a government they do not like if they vote for the opposition in the hope that others would vote for the PAP is one that has been floated by prominent ruling party politicians for some time now.

Opposition parties, including the WP, criticised such comments as a ploy to get voters to elect the PAP. The opposition accused the PAP of employing scare tactics by suggesting that Singaporeans could unintentionally replace the Government with the opposition if they vote to create checks and balances in Parliament.

While Mr Goh warned against an “unintended election outcome”, Trade and Industry Minister Chan Chun Sing had asserted that the three biggest opposition parties — the WP, the Singapore Democratic Party (SDP) and the Progress Singapore Party (PSP) — could join forces and form a replacement government.

The PSP chief, Dr Tan Cheng Bock, a former PAP MP himself, had echoed that it is “very unlikely” that the opposition would be elected in enough seats to form a replacement government and dubbed Mr Chan’s warning of a freak election result a ploy to scare voters.

In Parliament on Wednesday, Mr Singh hit back: “It took 16 years after our independence for the opposition to win even one elected seat, and 23 years after 1988, when the GRC system introduced, for the opposition to win one GRC,” pointed out Mr Singh, referring to the WP’s J. B. Jeyaretnam winning the Anson seat in a 1981 by-election as well as the WP’s victory in Aljunied GRC in 2011.

“Let’s put this fear-mongering in perspective, and I hope that the historical look-back is helpful in terms of how realistic this prospect that (Mr Chan) says is possible. I don’t think it is possible at all.”

Deputy Prime Minister Heng Swee Keat rose at the end of the exchange to second Mr Lee’s  views. Mr Heng, who also Finance Minister and Coordinating Minister for Economic Policies, said he is grateful to the country’s founders’ approach towards the reserves.

Speaking from the perspective of someone who has been directly involved in using the reserves during the global financial crisis and the Covid-19 pandemic, Mr Heng said that the reserves allowed the Government to “focus fully on what would best serve the interest of Singaporeans” instead of worrying about how to finance loans that could impact the future of the next generation.

The WP was the only opposition party elected to Parliament in the recent General Election while two PSP candidates became Non-Constituency MPs. The WP has 10 MPs in the House, compared to the PAP’s 83 MPs.

PAP, opposition accuse each other of fear-mongering as Polling Day draws close