Govt and opposition MPs asked to leave the. chamber in 'particularly rowdy' session 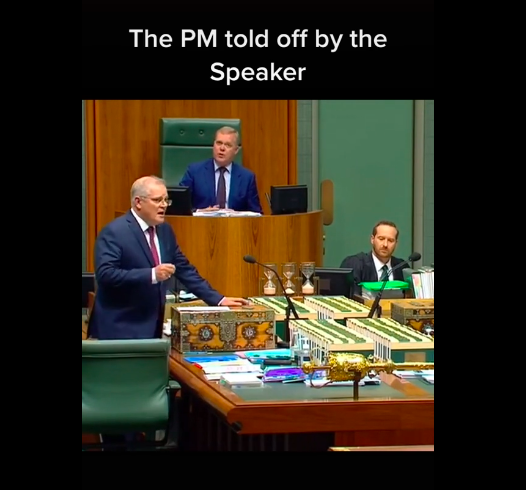 Mr Lim, the leader of the People’s Voice Party, called it an example of “True Parliamentary Democracy At Work.”

The video had been uploaded by @sbsnews_au Naveen Razik on Thursday (May 27) and has been viewed over 320,000 times.

Mr Smith’s terse answer to Mr Morrison was also reported in the UK’s The Guardian and Australia’s The New Daily.

The session, which occurred on Wednesday (May 26), had apparently been a “particularly rowdy” one, and both government and opposition MPs had been asked to leave the chamber.

As SBS’ Naveen Razik captioned his TikTok post, the Speaker was “taking no prisoners”.

Mr Smith had issued warnings to government and opposition MPs to tone down their behaviour and had said, “If members want to continue interjecting, I’ll eject them.”

At one point, when Mr Morrison did not answer a question from the opposition, the Speaker asked him to return to the question.

Mr Morrison quickly answered, “Happy to do that, Mr Speaker.”

Mr Smith shot back, “I don’t care whether you’re happy or not. You need to return to the question.”

Mr Lim wrote in the caption to his post, “True Parliamentary Democracy At Work -Australian Speaker Of Parliament Insists The PM Answers The Question!

“Doesn’t care whether the PM is happy or not!

“Can’t dodge or siam in the Parliament down under! That is the function of Parliament. It is to hold the government of the day to account and the Opposition must always remember its role too, which is to ask tough questions!

“Every Parliamentary Question has and makes a point!”

The post has been viewed over 7000 times and has also been widely shared.

However, one commenter wrote, “We can only dream of this happening here.”

Others agree that in Singapore, Parliament is quite different.

Still, others expressed the hope that one day this type of exchange will become a reality.

Read also: Lim Tean: I would have banned all travellers from India at the beginning of March!

Lim Tean: I would have banned all travellers from India at the beginning of March!