She is expected to ask the Government to temporarily ban PMDs "until there are proven solutions for the safer use of PMDs" in view of the recent spate of fires involving PMDs.

Parliament is set to debate the use of Personal Mobility Devices (PMDs) and the laws governing the use of PMDs when it sits on Monday (5 Aug).

The Senior Minister of State is set to deliver a ministerial statement on PMDs, on behalf of Transport Minister Khaw Boon Wan, and over 18 questions have been filed by Parliamentarians on the topic.

Nee Soon GRC MP Lee Bee Wah is among those who is set to pose question to Mr Khaw on PMDs and she is expected to ask the Government to temporarily ban PMDs “until there are proven solutions for the safer use of PMDs” in view of the recent spate of fires involving PMDs.

She is also planning on asking Mr Khaw whether LTA can bring forward the deadline for all motorised PMDs used on public paths to be certified to the UL2272 standard and whether there are plans to incorporate dedicated lanes for bicycles and PMDs into the existing infrastructure to ensure the safety of both pedestrians and riders.

Dr Lee has been a vocal opponent of PMD use in Singapore. Last month, she expressed great alarm after reading facts on the average speeds of Personal Mobility Devices (PMDs) and repeated her desire for the Government to be stricter with PMD riders.

In September last year, Dr Lee slammed the transport authorities over a “lack of strategic and forward planning” as she brought up the same issue in Parliament.

Criticising the transport authorities for pushing for a car-lite society without considering the limited infrastructure that is presently available to support other forms of transport, Dr Lee said that PMD transport has created “a new set of problems” in Singapore due to the “lack of civic-mindedness” of PMD riders and a “lack of strategic and forward planning” on the part of transport authorities.

The ruling party MP asked if the authorities are being too hasty to push a car-lite culture stressing less reliance on petrol or diesel-fueled vehicles as she pointed out that a lack of foresight has caused the authorities to play catch-up when reckless PMD users endanger pedestrians.

Claiming that “many residents tell me it is no longer safe to walk in Singapore,” Dr Lee asserted: “It is the lack of strategic and forward planning on the part of transport authorities in allowing the owners of these personal mobility devices free reign to public pathways and pedestrian walkways.”

“We should have thought of safety long before these 20 to 40kg missiles go crashing into innocent pedestrians. Now we are constantly playing catch-up though I would say it is better than turning a blind eye or a deaf ear to the public outcry against those who use their PMDs recklessly.”

After a recent spate of accidents involving PMD users, the Government passed amendments to the Active Mobility Act that will require PMD users to adhere to a 10km/hr speed limit on footpaths, from 2019.

Under the Active Mobility Act, errant cyclists and personal mobility device (PMD) riders can face fines and jail time if caught. Those caught speeding may face a maximum S$1,000 fine and/or up to three months in jail.

Dr Lee, however, does not think that this measure is adequate and took a bleak view of the changes. Calling on the Government to review the Act and consider passing more equitable laws that ensure the safety of pedestrians, Dr Lee slammed the amendments to the Act.

The ruling party politician said that the act “seems to favour cyclists and PMD users” and asserted that it is “near impossible” for cyclists and pedestrians to co-exist in areas with high foot traffic.

Read the questions on PMDs filed by other parliamentarians here: 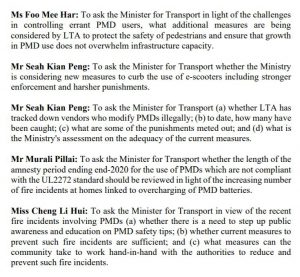 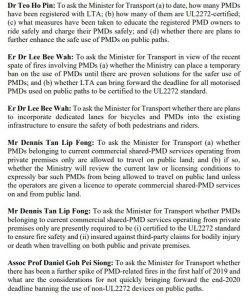 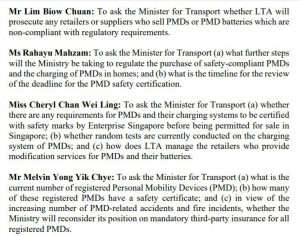