Wham said that the Ministry of Manpower uses Leticia to 'educate' domestic workers in its campaigns, thinking it's some form of infortainment. He added that it is demeaning because prejudices and discrimination against them have been turned into a joke.

Singapore—Fresh on the heels of the E-Pay-Preetipls controversy which started with an advertisement getting called out for using a Singaporean of Chinese descent in brown face, activist Jolovan Wham pointed out in a Facebook post that Singapore’s Ministry of Manpower is doing the same thing in the videos that they use.

This is the Filipino domestic worker equivalent of brown face. A Singaporean Chinese woman feigns a Filipino accent and…

On August 3, Mr Wham posted a photo of actress Michelle Chong, in character as a Filipino maid named Leticia, side by side with dark-skinned man.

He wrote, “This is the Filipino domestic worker equivalent of brown face. A Singaporean Chinese woman feigns a Filipino accent and acts like a dim wit who speaks broken English. She’s seen with her Bangladeshi ‘boyfriend’, another stereotype that’s milked for laughs.”

Mr Wham then went on to say that even if the character is played for laughs (Ms Chong is a comedienne after all, and the videos are presented in a comic manner), it’s representative of how some employers see their helpers, which he describes as “slow, stupid, and unable to think for themselves.”

This, he believes, is ultimately harmful for these workers, since it “makes light of the systemic exploitation they experience and the unequal balance of power between them and us.”

The activist called out the Ministry of Manpower for the use of such a character in their videos, writing,

“The Ministry of Manpower uses Leticia to ‘educate’ domestic workers in its campaigns, thinking it’s some form of infortainment. It’s not. It’s demeaning because we have turned our prejudices and discrimination against them into a joke. We are not as outraged because a domestic worker from the Philippines is not one of ‘us’. Perhaps it’s time for us to be.”

Mr Wham’s post has been shared over two hundred times since its posting, with a lot of people agreeing with the activist’s position.

Some Filipinos spoke up on the comments thread of Mr Wham as well. One Filipino commenter even tagged the Philippine Embassy in Singapore to speak up in defense.

But others pointed out that Ms Chong is a comedienne who parodies a whole range of characters, since this is part and parcel of her job. 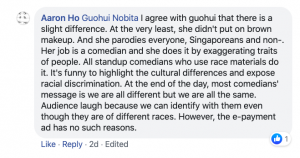 This is not the first time Mr Wham has drawn attention to Ms Chong’s ‘Leticia’ character, who first appeared in the TV series ‘The Noose.’ Way back in 2011 the activist wrote, “The Leticia and Terry series in ‘The Noose’ milks its laughs by reinforcing stereotypes of domestic and foreign workers. The Bangladeshi guy only ever appears as the ‘boyfriend’ and Leticia, with her exaggerated accent, is a caricature of the silly and subservient Filipino maid. They even managed to throw in a racist joke, with Leticia remarking how ‘boy boy’ needs sun block so he does not get lost in the dark.”

The Leticia and Terry series in 'The Noose' milks its laughs by reinforcing stereotypes of domestic and foreign workers….

Early in 2018, when the MOM video featuring Leticia was first released, a writer for the Alvinology blog commented on the video, asking the question whether it was for the domestic helpers’ education, or for the entertainment of their employers.

“Many wonder if the video is targeted towards educating the Filipina helpers in Singapore or for entertaining the Singapore employers of the helpers though. We wonder how the domestic helpers feel about being caricatured on a serious issue.”/ TISG