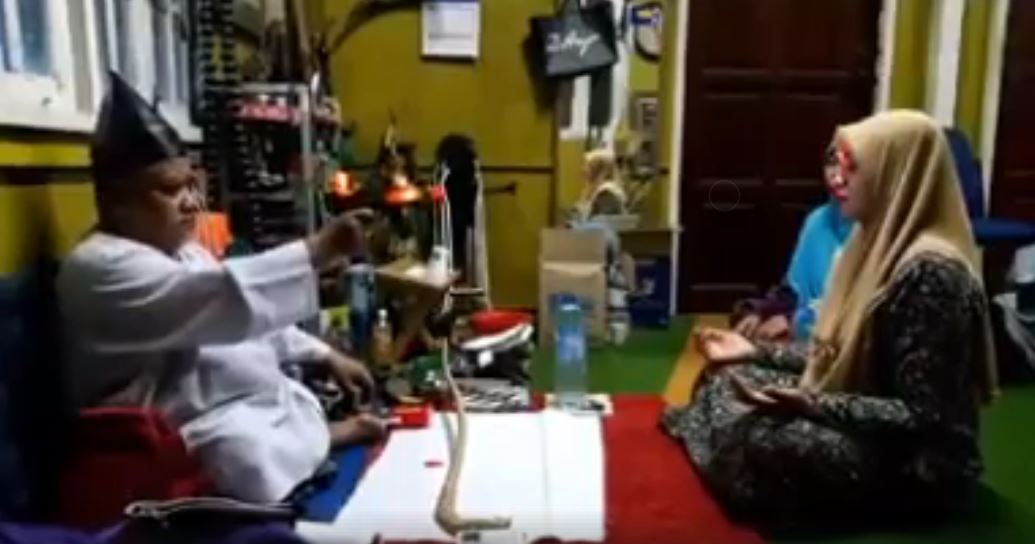 A video has been circulating online showing a “bomoh” allegedly warding off evil spirits that a devotee is apparently afflicted with by firing cheap toy guns at her.

In the video, the “bomoh” chants as he points a number of plastic toy guns at the unsuspecting devotee who is seated in front of the “bomoh” with her palms turned upwards. The middle-aged man fires the guns directly at and around the woman as he continues chanting.

At one point the man takes a staff in his hand and stamps it multiple times on a piece of white cloth or paper between him and the devotee, before firing two plastic guns with flashing lights at the woman as he chants:

I am seriously considering this vocation for my retirement. As long as we have plenty of brainless creatures plus the magic of some arabic verses and plenty of cheap batteries from China, I can make good money without need to steal like najib. 25th century bomoh in 21st century.

The “bomoh” is believed to be from Malaysia. Sharing the video of the “25th century bomoh in 21st century,” Facebook user Sarajun Hoda wrote online:

“I am seriously considering this vocation for my retirement. As long as we have plenty of brainless creatures plus the magic of some arabic verses and plenty of cheap batteries from China, I can make good money without need to steal like najib. ”

The plastic gun bomoh is not the first “bomoh” to use questionable objects in an effort to demonstrate his powers. A few years ago, another Malaysian bomoh used coconuts and a “magic carpet” to try to locate the missing MH370 boeing that vanished mid-air.

In 2014, Bomoh Ibrahim Mat Zin – who calls himself Raja Bomoh Sedunia Nujum VIP with the title of Datuk Mahaguru – conducted the rituals using “Zam-Zam” water, two coconuts, a “magical” walking stick and carpet to find the missing plane. Earlier, the bomoh had also used binoculars made of bamboo and a fish trap hook to try to locate the missing aircraft.

With reportedly 50 years of experience as a Bomoh, Ibrahim became famous after he offered his assistance to locate the victims of high-profile cases like the Highland Towers tragedy and the Mona Fendy case.Follow us on Social Media