Singapore—A listing that sought a brothel operator for a property at Geylang Lorong 20 surprised many, and caused its agent to amend it in a further advertisement.

The original listing was taken down, and later put up as a “shophouse” instead.

The listing had been posted on the CommercialGuru website, and a screenshot was put up on the popular Complaint Singapore Facebook page.

A netizen by the name of Liu Peter posted a picture of the ad from CommercialGuru, which read “Seeking Brothel Operator @ Geylang Lorong 20.”

The 2,000 square foot property was advertised for S$8,500 a month, along with photos of the place and its surroundings. The listed property agent is Marc Lee of Propnex Realty Pte.

According to AsiaOne, the listing was taken down, but later that day, the property was listed as a shophouse, with the same photos and specifications.

The webpage of the property, however, still reads partially as “for-rent-seeking-brothel-operator,” and Mr Lee is still the listed agent.

AsiaOne also reported that the listing was also put up on the real estate site, 99.co.

Mr Lee told 99.co that the Council for Estate Agencies (CEA) reached out to him to say the listing was “not appropriate.”

In an article on the site’s newsletter dated last month but updated only two days ago, Mr Lee said that he had listed the property in the way he did upon the instructions of the landlord.

“The landlord gave me the instruction to rent out his place at Lorong 20 Geylang, which is within a red-light district. He specifically asked me to find a licensed brothel operator to rent the premises to, so I just went and listed it accordingly,” Mr Lee is quoted as saying.

The property will be for rent from mid-2021 onwards. It has two storeys and a corner terrace, and is owned by “a corporate entity.”

However, Mr Lee added that the “landlord is purely a property owner without the licence to operate a brothel.”

And on the day that a screenshot of the ad made an appearance on the Complaint Singapore Facebook page, Mr Lee was contacted by CEA.

He told 99.co, “CEA called me today and I told them that it was the landlord that gave the instruction how to market [the property.]

They told me to take [the listing] down saying it’s not appropriate.

I didn’t even have the time to go to my account but the portal had already removed the listing,” he added. 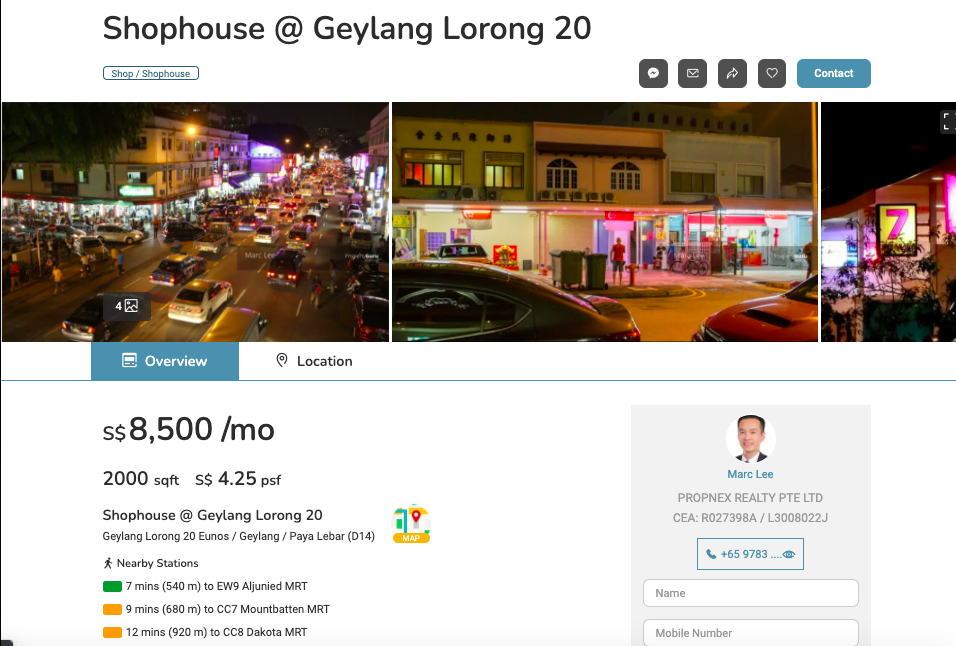 99.co added that real estate agents are required to “act in the best interest of the client” and “act in accordance with the lawful instructions of the client”.

Furthermore, the Estate Agents Act says that the agents should not “advertise any property at a price or on other terms, or in any manner, different from those instructed by the client.”

As operating a brothel with a valid license is legal in Singapore, the owner of the property gave instructions that are valid, and that Mr Lee was obligated to list the property as he had been told to.

However, 99.co added that the CEA reached out on Thursday (Dec 17), and said that it had not, in fact, “request (sic) the agent to remove his advertisement”.

CEA has consistently reminded property agents that they are to conduct themselves professionally when advertising properties both on print and online platforms. These are often the first touchpoints that they have with potential clients, and also the general public, to form a positive impressive. Property agents should therefore ensure that the content of their advertisements is accurate and appropriate.” —/TISG