Revealing that she is doing “a PhD on Chinese privilege, Chinese supremacy and racism in Singapore,”Ms Thanapal said that she “had to run away to Australia because I was being threatened by the Singapore state with sedition for speaking out about race” In the past, Ms Thanapal has bragged that she is an authority on the issue of racism here. Styling herself as “Singapore’s most well-known anti-racism activist,” Ms Thanapal earlier said that she has “written extensively on racism in Singapore” and “coined the term and theory around what is now called “Chinese Privilege.””

Revealing that she is doing “a PhD on Chinese privilege, Chinese supremacy and racism in Singapore,”Ms Thanapal said that she “had to run away to Australia because I was being threatened by the Singapore state with sedition for speaking out about race.”

In one of her latest Facebook posts, published on Tuesday (13 Aug), Ms Thanapal said that she is seeking donations to continue her work and complete her dissertation on ‘Chinese Privilege in Singapore’.

Ms Thanapal, who seems quite possessive over the term ‘Chinese Privilege’, again pointed out that she was the one who coined the term and lamented that she has had to deal with “a number of disgusting Singaporean minorities who are trying to steal my work” in the past two weeks. She wrote:

“In the last two weeks I’ve dealt with a number of disgusting Singaporean minorities who are trying to steal my work and erase me from my own contributions. (We all have our Uncle Toms ??‍♀️).

“If you think this behaviour is abhorrent and you aren’t one of them, do contribute to my Patreon. A chunk of this money is being used to finish my dissertation on Chinese Privilege in Singapore, because yes, I AM the one who came up with it.

“If you’re an international follower who likes my work on other things, do also consider becoming a Patron. It’ll allow me to write more analysis on the kind that I’ve done on Priyanka Chopra the past two days.

“As always, if you’ve just learnt from me and want to help me continue educating people on a wide range of issues, keeping me mentally able to do this work by momentarily supporting me is the best way.”

Asserting that her work is “rooted in providing resources and critical discourse around the issues of race and the Global South,” Ms Thanapal revealed that she works 2 and a half jobs to make a living and seeks donations so that she can quit one of these jobs.

Asserting that she wishes to serve her audience better and needs help to do that, Ms Thanapal wrote that she is seeking donations to complete her PhD dissertation, her work on educating her audience on “all things social justice” and writing short stories.

On her dissertation, Ms Thanapal wrote: “It is on Chinese Privilege in Singapore (you guessed it!) and racism in the Global South. I am making the theory on how to think about and articulate non-white racism in a world that is centred on whiteness. I am decolonizing anti-racism but writing requires time and reflection and space, which I can only get with your help.”

Ms Thanapal said: “I’m not looking to replace all my jobs, just one that covers mortgage and bills, the monthly portions of life. I will be able to pay for everything else by working my other jobs.” 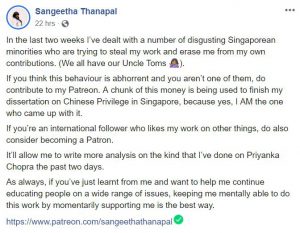 In January this year, the Singapore Police Force issued a stern warning to Ms Thanapal over a Facebook post that promotes feelings of ill will and hostility between the races. In the post that drew the scrutiny of the authorities, Ms Thanapal had called Singapore “a terribly racist country”.

Calling Singapore a “Chinese supremacist state,” Thanapal had asserted that Singapore “embarked on a form of eugenics in the 1980s meant to displace its indigenous population and replace it with settler colonial Chinese people,” in the same Facebook post.

Thanapal, who lives in Melbourne, was investigated in January when she returned to Singapore. On 16 Jan, the police issued a stern warning to her, in consultation with the Attorney-General’s Chambers, “for an offence of promoting enmity between different groups on grounds of religion or race” under Section 298A of the Penal Code.

In a Facebook post after she was given the warning, Thanapal wrote: “Singapore is a country that is unsafe for activists, intellectuals, writers and a whole host of anyone who dares to think and speak differently.” -/TISG