Singapore — In another incident revealing a lack of religious tolerance, a woman’s neighbours have installed a fan outside their gate in an attempt to extinguish the prayer flame she lights in a tiny urn outside her own flat.

In a 30-second-long TikTok video that has since been removed by one Durga Lechimi, she filmed her neighbours’ yellow desk fan whirring in the empty corridor.

She then panned the camera to a tiny flame lit with two or three pieces of camphor outside her own flat, some six metres away from her neighbour’s doorstep. 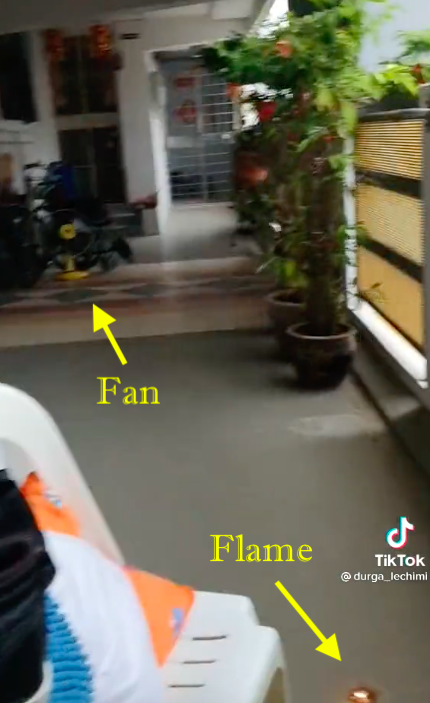 The woman also showed the small prayer altar her family has outside their corner unit, where another woman was seen praying.

While it is unclear why the neighbours installed the fan, it was pointed in the direction of the altar and the flame. The fan was whirring in an empty corridor, blowing air towards the flickering flame.

Last week, a woman was filmed clanging a gong because her neighbour had to ring a bell for his prayers.

One Livanesh Ramu wrote in a Facebook post on Wednesday (Jun 9) that like many other Hindus, his family had prayers twice a week, with each session involving the ringing of a bell, but not for more than five minutes.

”Having lived in this home for more than 20-years we never had any issues”, he wrote.

In the 19-second clip Livanesh shared, he could be seen ringing a prayer bell and making offerings right outside his own doorway. A woman then came out of the neighbouring flat and picked up a stick with which she repeatedly struck a gong for about 16 seconds. She then stared at Livanesh before going back to her flat.

She banged the gong repeatedly, drowning the tinkle of the prayer bell.

TISG has reached out to Durga Lechimi for comment and clarification. /TISG

Read related: Woman comes out of flat banging a gong repeatedly because her neighbour rings a bell for prayers