Ms Cheng had been informed that Clicknetwork would get a different host for the show “The Public Investigator”. However, her show Xiaxue’s Guide to Life is presumably continuing on Clicknetwork, as nothing was said about it

Singapore—The latest chapter in the saga of influencer Wendy Cheng, popularly known as Xiaxue, is not quite over yet.  Production house Clicknetwork TV, the producer of an upcoming show that she was slated to host, dropped Ms Cheng from one of its shows and is proceeding with another host.

In a statement on its Facebook account, Clicknetwork said, “We believe that there are many ways to shine a light on issues, and we do not support opinions delivered in a manner that is divisive. To be clear, we are against racism, bigotry, and hate.”

Clicknetwork has always supported a diversity of opinions, voices, and open debate. While we appreciate the diversity of…

Posted by Clicknetwork on Tuesday, 21 July 2020

The post added that Ms Cheng had been informed that Clicknetwork would get a different host for the show “The Public Investigator”. However, her show Xiaxue’s Guide to Life is presumably continuing on Clicknetwork, as nothing was said about it.

Ms Cheng took to Instagram to upload a video talking about the “cancel culture” that’s coming to Singapore’s shores and why it’s so “dire.” She described cancel culture as being about “a select group of people who are actively obsessed with causing harm.” She also claims that the brands she works with can’t ignore the “harassment they’ve been constantly receiving… so they have to do what the woke mob dictates.”

What is cancel culture and how is it going to affect you?? Watch!! This video is 19 mins (sorry it’s a serious topic!) so if you don’t have time to watch it bookmark this first!! ⠀ And yes I’m giving five FREE Instagram ads for brands who are willing to give a FUCK YOU to cancel culture!! Yes free!! ? Having a tough time during covid and want to promote your business? I’ll be leaving the google docs link in my ig stories for brands to apply for this ONCE IN A LIFETIME opportunity so apply now!!

Playwright Alfian Sa’at wondered about Xiaxue’s popularity, writing in a Facebook post, “This Xiaxue person, what is she actually? Is she an actress, a singer, a writer, what is her talent? … do her many followers think that being a mouthy and cruel professional troll–who says offensive things and cries victim when eventually called out–is some kind of talent? If she’s being admired for being ‘authentic’, why admire the authentically nasty? Or maybe people are just fascinated by train wrecks?”

Ms Cheng made the news last week after posting about now MP-elect Raeesah Khan in an Instagram Story which included the line, “Oops guess it wasn’t a good idea to stir up racist sentiments was it?… Stop fielding radical feminists/leftist as candidates ffs we don’t need their poison infecting our politics.”

The IG story led to the hashtag #PunishXiaxue to trend, and some companies dropped Ms Cheng as an endorser. A petition on change.org was posted on July 8, entitled, “Punish XiaXue for seditious content,” with over 27,000 people signing it.

Throughout the online furor, Ms Cheng remained steadfast unrepentant, writing that she refused to be bullied “into silence.”

Ms Cheng’s popularity rose when she began blogging in 2003, and the public has followed the changes that have occurred in her life including plastic surgery on her nose (sponsored by MediaCorp TV), her marriage to an American engineer and the birth of their son.

Her award-winning blog, which reached 50,000 readers at its height, did not just have run-of-the-mill fashion content, but often ventured into provocative topics, featured profanities uncensored, and was generally perceived to cater to a young female audience “looking for an alternative voice.”

She also started writing for TODAY, The New Paper, Maxim magazine, and other media and became a sought-after endorser for several beauty and lifestyle brands.

No stranger to controversy, nor to brands separating from her, her comments on the disabled, foreign workers, iPhones, US President Donald Trump, right-wing personality Milo Yiannopoulos, as well as online fights with people such as popular Singaporean musician Narelle Kheng, fellow blogger Dawn Yang over the years have gained her as much notoriety as popularity, if not more. 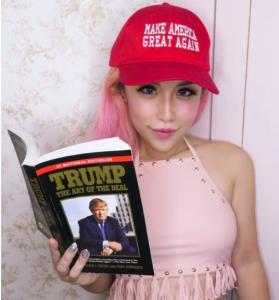 Is this the end of Ms Cheng? Will she actually get cancelled? Only time will tell. The savvy influencer just offered “five FREE Instagram ads for brands who are willing to give a F*** YOU to cancel culture!!,” for anyone who wants to promote their business during the pandemic.

And it seems that many people still support her, based on the comments left on Clicknetwork’s announcement post that they were dropping her as a host of “The Public Investigator.” —/TISG