The influencer's IG story about Ms Khan led to the hashtag #PunishXiaxue to trend, and netizens have urged companies to drop Wendy Cheng as an endorser

Singapore—#PunishXiaxue is trending on Twitter as calls sound for the boycott of influencer Wendy Cheng—aka Xiaxue—for coming after Workers’ Party’s (WP) Raeesah Khan with accusations of racism.

Ms Khan is part of the WP’s team in Sengkang GRC that won in the recently-held General Election. The longtime activist is now the first opposition female Malay Member of Parliament, and, at age 26, is also Singapore’s youngest MP.

On July 5, the Singapore Police Force confirmed that two complaints had been filed against her for comments she made online in 2018 concerning race and religion. Ms Khan made a public apology on the same day and has only gained more support as many Singaporeans believe that she had done nothing wrong.

But it seems that the story has not ended for Xiaxue, who has a history of expressing her controversial and politically incorrect opinions on her social media sites.

The influencer wrote an Instagram story about Ms Khan that said, “Oops guess it wasn’t a good idea to stir up racist sentiments was it? I’m not a fan of the lack of freedom of speech we have in Sg, but I love it that whether you post woke or anti-woke comments, the gov’t is gonna come after you all the same. At least this is better than in Western countries where leftists can say they want to kill all white people but woe betide you if you use the wrong pronoun, it’s a criminal offense. stop fielding radical feminists/leftist as candidates ffs we don’t need their poison infecting our politics.” 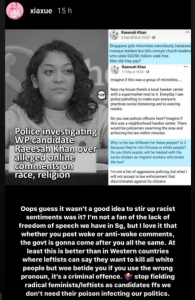 The IG story led to the hashtag #PunishXiaxue to trend, and netizens urged companies to drop Ms Cheng as an endorser.

Shortly afterward, beauty brand Fresh wrote “Fresh supports diversity and inclusion in all forms, and we stand by that. In light of this, we have ended our partnership with Wendy Cheng.”

The company had posted on Instagram celebrating “Diversity, Equity & Inclusion Day” on July 6, and numerous commenters asked the brand to drop Ms Cheng. Speaking to Mothership, Ms Cheng  expressed that she was “disappointed” but understood that the brand was being “harassed by trolls.” According to her, the “woke mob” is a small, but loud minority.

On July 8, Ms Cheng took to her blog to explain that police had come to her house to ask about two tweets she had written in 2010 and 2011. In the tweet from 2010 she had written that “They molest our people and f*** our maids and leer at girls” but explained in her blog post that she did not even remember who she was referring to. In the 2011 tweet she asked why there were so many people of a certain nationality in Jurong East.

Ms Cheng wrote that the police told her to delete the tweets. However, she wrote, “they have more or less gone viral now, so really, there is no point in the deleting.”

She went on to explain that the context of her tweets is the sexual assault she experienced from members of a particular nationality when she was a child and in her teens. “When I was a child and teenager, I was often sexually assaulted by members of this group. I will call them Group B for short.”

Ms Cheng added, “I have no issues with Group B as a nation, nor their women. I only am fearful of a tiny subcategory of them, the male migrant workers who come to Singapore.”

A petition on change.org was posted on July 8, entitled, “Punish XiaXue for seditious content,” with over 25,000 people signing it to date, including YouTube star Preeti Nair, who tweeted about it.

HAHAHA I just signed this petition “Punish XiaXue for seditious content” AND YOU CAN TOO! here ya go: https://t.co/U84r3pgdoN ??✨

Ms Cheng has remained unrepentant thus far. Her most recent Instagram post is a video where she wears a t-shirt that reads “Pray for my haters,” and says, “I don’t f***ing apologise. If you offended (sic) it’s your own business.”

??‍♀️ ⠀ Authenticity > money. I’ve been posting unpopular views since 2003. ⠀ Blogged when nobody was paying me, will continue to post if nobody is paying me now either. You want politically correct influencers who grovel and backtrack at every criticism and give fake apologies you can find them a dime a dozen. You may not like my views but I have a right to say them. ⠀ You are not going to bully me into silence, or force me to be a hypocritical woke sheep like you, echoing the same tired sanctimonious virtue-signaling crap every other person on social media is repeating ad nauseam. It’s like all of you are infected by the same mind virus. Blah blah patriarchy blah blah intersectionality blah blah internalized systemic institutional structuralism blah blah cis-heteronormative inclusivity representation acknowledge your privilege blah blah blah. Dude. Have some original thought. And here’s something that will shock you: if your ideologies are all backed up by giant corporations, you are not that radical. ⠀ I post not to please you. I post because I think it’s important to have diverse viewpoints out there for people to decide for themselves. Why? Are your arguments so weak you want to shut down anyone who disagrees with you? ⠀ I have the strength to carry on no matter how hard you fuckers try to bring me down because my supporters expect me to always be real, and to say the hard truths on their behalf when they can’t. Facts are sometimes not nice, but someone has to say it. If it has to be me, so be it. You hateful people don’t matter. My supporters that have been here for years and years matter. #punishxiaxue

In the caption she writes, “You are not going to bully me into silence, or force me to be a hypocritical woke sheep like you, echoing the same tired sanctimonious virtue-signaling crap every other person on social media is repeating ad nauseam. It’s like all of you are infected by the same mind virus. Blah blah patriarchy blah blah intersectionality blah blah internalized systemic institutional structuralism blah blah cis-heteronormative inclusivity representation acknowledge your privilege blah blah blah. Dude. Have some original thought. And here’s something that will shock you: if your ideologies are all backed up by giant corporations, you are not that radical.” —/TISG