The Independent Singapore News
Home News Waiter slapped by customer when reminded of No Smoking in Shah Alam,...

Waiter slapped by customer when reminded of No Smoking in Shah Alam, Malaysia 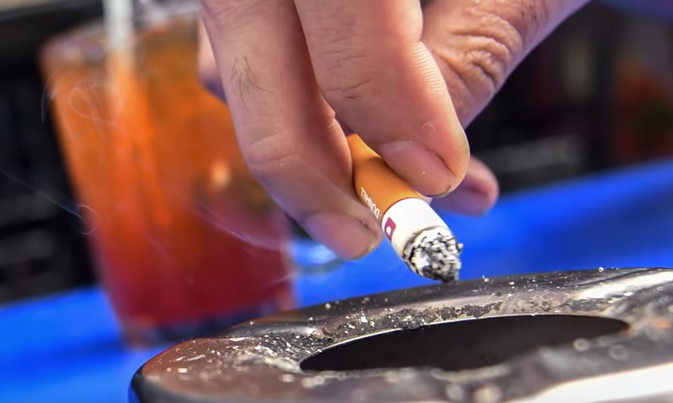 One waiter was slapped in his left cheek by a customer after reminding him of the smoking ban during the first day of its nationwide implementation at all food establishments, including outdoors.

The waiter M Selvam is a 25-year-old Indian national who is working at Ameer Corner restaurant in Jalan Makmur 25/64, Section 25 in Shah Alam.

He walked up to the group of three male customers when he saw them puffing cigarettes inside the restaurant and politely reminded them about the No Smoking sign that was posted inside the premise.

The waiter did not expect one of the customers’ reply as he was given a slap in his face right away. After the incident, the three men made the payment and hurriedly left the mamak stall.

Though the waiter did not suffer any serious injuries, he and the restaurant management reported the incident to the authorities.

Shah Alam police chief Baharudin Mat Taib, who investigated the incident, said that the police are still in the process of identifying the suspect based on the video caught on CCTV. The suspect was not a regular customer of the place.

“We ask for the main suspect that slapped the employee to turn himself in to help with the investigation,” the police chief added. There were two other workers and five other customers who have witnessed the incident.

That day was really a bad day for Selvam as he was scolded by another customer regarding the No Smoking policy again. He was so disappointed with how people cannot follow rules: “I don’t know why people can’t just follow the rules and behave like this.” With its full implementation last Jan 1, the Control of Tobacco Product Regulations (Amendments) 2018 aims to protect the public from exposure to cigarette smoke.

In the 2015 National Health and Morbidity Survey, it was found out that 22.8 per cent of Malaysians – or five million people – aged 15 years old and above are smokers.

According to the Ministry of Health’s director-general of health Noor Hisham Abdullah, “The public are urged not to smoke in all eateries, whether air-conditioned or not. This includes inside and outside the buildings where the eateries, restaurants and food courts are.”

“The ban also covers food stalls and vehicles which provide tables and chairs for people to eat, as well as restaurants on ships and trains.”Owners and operators of food premises are obliged to display no-smoking signs clearly, and to remove ashtrays. This ban is also inclusive of vape, shisha or other products that produce smoke.

Smokers can only light up more than 3m away from an eatery, Deputy Health Minister Lee Boon Chye said. Owners of food establishments who fail to display no-smoking signs can be fined up to RM3,000 or jailed up to one year.

However, the Malaysian Health Ministry will give offenders a grace period of six months to comply with the ban, during which it would educate and warn restaurant owners and smokers.

There were already 1,400 warning letters for No Smoking violations issued by the government this week.

With this Smoking Ban in restaurants, the netizens have expressed their opinions. Some were supportive of it, others made suggestions.

A lot have empathized what the waiter had been through that he was just doing his work: