Business & Economy Startups This robot could put an end to the practice of manual manhole... 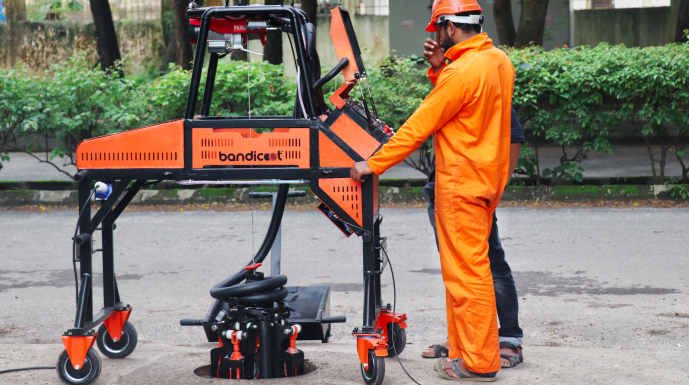 One hundred and two.

That is the number of people killed inside manholes across India in 2017. An average of eight deaths per month!

Manual scavenging — a term used mainly in India to describe the practice of removing untreated human excreta from bucket toilets, pit latrines and manholes by hand with buckets and shovels — has been going on for decades with scant regard for human life.

Despite a meagre pay of INR 150-200 (US$2-5) per day and high deplorable working conditions, this caste-based occupation still finds takers, who do this job just to make their ends meet. With no protective gear and other safety measures in place, these poor people risk their lives — some die from asphyxia and inhalation of hazardous gases inside the manhole, and those fortunate to come back alive from the manhole develop serious health problems.

But their stories hardly hit headlines.

“Despite a Supreme Court legislation banning manual scavenging in India in 2013, this age-old practice still continues unabated,” said Arun George, an entrepreneur who is working on the automation of manhole cleaning in India. “Each year, hundreds of people die a tragic death by inhaling dangerous gases, which contain hydrogen sulphide, ammonia, carbon dioxide, methane, and nitrogen. This practice should end,” he told e27.

With an aim to bring a change to this system, George and his friends Nikhil NP, Rashid K, Vimal Govind (all Engineers) launched Genrobotic Innovations in 2017. The startup — based out of Thiruvananthapuram in Kerala, south India — has developed a semi-robotic device, called Bandicoot, which could put an end to the practice of manual scavenging and manual cleaning of manholes and sewages.

“Bandicoot is a device that can be used to clean the filth and other liquid waste clogged in manholes. Equipped with a pneumatic system, the robot’s spider-like hands can remove the heavy manhole cover with ease and then enter the manhole by converging its diameter. It can adjust the size in accordance with the the shape of the manhole. Bandicoot can then pull out the solid waste material and unblock the sewer line system,” George explained.

The motivation occurred to the quartet during their college days. After watching James Cameroon’s Hollywood sci-fi movie ‘Avatar’, they were inspired to build a 10-ft semi-robotic robot with arms and legs similar, which could be operated by a person inside. This device earned wide-spread appreciation.

The the idea of a manhole cleaning robot hit them in 2015. “It was a news report about a manhole accident in Kozhikode in Kerala that led us to where we are now. The accident, occurred in the heart of the city, claimed two lives and this exposed the ill-practice of manual scavenging in the country. This is when we thought of building a robot that could put an end to this, which is a disgrace to any civilised society,” George shared.

While there are several sewage removal methods in the market, none of these is as effective as Bandicoot, claims George. It requires a worker to either manually position a sewer jetting machine or sewer rods into the manhole for a deeper cleaning, or use a sewer suction machine to suck out the wastage. However, this system only succeeds in removing the semiliquid waste, leaving behind the solid waste, he said.

“Bandicoots arms are capable of performing multiple tasks like cleaning the uneven terrain of the manhole with a specially designed shovel and also it can be used in the inspection of sewer line. This is designed for the common man with a simple user interface. A worker can operate the device himself — which only eliminates the risk of their job, not their employment opportunity,” noted George.

Bandicoot — which George claims is the world’s first robot for cleaning manhole — has got the Indian patent and  has also filed for international PCT patent in over 150 countries.

The cost of the robot varies depending on the features required by the customer — which could stretch up to INR 25 lakh (US$35,000) including taxes and transportation.

The product is designed and manufactured in Genrobotic’s own production centre at Kerala Industrial Infrastructure Development Corporation in Thiruvananthapuram.

Besides Bandicoot, the team has also developed Generation One (G1)-powered exoskeleton, and G2 medical exoskeleton, compact version of G1.

Within just a year of the launch, Bandicoot has already won hearts — not just in India but across Asia.

The company has already signed a Memorandum of Understanding with the Kerala Water Authority and some other provincial governments in India.

“The Municipality of Sharjah is also planning to rope in Bandicoot to conduct inspections in the city sewers and conduits. Besides, the team would also engage in R&D for reshaping the Bandicoot to meet the requirements of the Sharjah government,” he said.

Early this year, Genrobotic raised an investment from Unicorn India Ventures. Google India MD Rajan Anandan is also an investor in the startup.

“Manual scavenging is a global issue; most developing countries are facing this problem. In India alone, there are around 4.5 million manual scavengers as per a study. Bandicoot is an innovative step in the right direction to make the lives of this vulnerable section of the population better and also help them lead a dignified life,” George concluded.

The post This robot could put an end to the practice of manual manhole cleaning in India appeared first on e27.