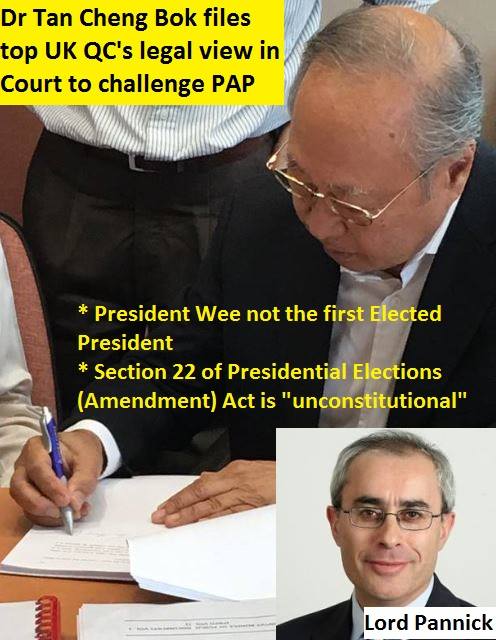 Dr Tan said, “To recap, on 31 March 2017, I held a press conference explaining why in my layman’s opinion, starting the count from President Wee’s term appeared to be inconsistent with the spirit and purpose for reserved elections. I then invited the Government or AG to explain the legal reasons for their count.”

But the PAP govt chose to ignore Dr Tan’s request for further explanation on the matter. Hence, Dr Tan has no choice but to seek arbitration from the Court.

He explained, “Since this is a matter of national importance, I sought to find the legal answer and consulted the best constitutional lawyer I could find. He is Queen’s Counsel Lord David Pannick.”

“I gave Lord Pannick the Commission Report, White Paper, all relevant Hansard parliamentary reports from 7 Nov 2016 to 6 February 2017, our Constitution and all related statutes on this issue. I asked him one question: whether the AG correctly advised the Government to specify President Wee’s term as the first to be counted on the basis that he was the first President to exercise elected powers,” he added.

“Lord Pannick has advised that he disagrees with the AG’s advice, and that section 22 Presidential Elections (Amendment) Act 6 of 2017 as it stands is unconstitutional.”

Dr Tan further explained that after receiving Lord Pannick’s reply, he felt that it would be in the public interest to have the Court decide which legal view is correct – Lord Pannick’s or the AG’s.

Lord Pannick’s written opinion has been submitted in Dr Tan’s affidavit so that the public can also see for themselves. Dr Tan commented that it is in nobody’s interest to have a Reserved Election that is unconstitutional.

“I am satisfied that I have, to the best of my ability and capacity, done my part to do what is right in the circumstances, which is to bring to this Court’s attention Lord Pannick’s opinion,” he concluded.

So, who is this Lord Pannick?

Recognised as one of the “stars at the bar” for his handling of high-level cases in UK and international law, Lord Pannick appeared in some 100 cases in the Appellate Committee of the House of Lords (before it was replaced by UK’s new Supreme Court). He has argued more than 25 cases in the European Court of Justice in Luxembourg and over 30 cases in the European Court of Human Rights in Strasbourg. His long list of appearances before the highest appellate courts in the UK and Europe is almost second to none.Graduated from Oxford, Lord Pannick was ranked as one of Chambers UK’s Top Silk Bar 100 in 2013. The Chambers UK, a British legal guide said of him, “Without question, he’s superb. He’s a man of great intellect who can turn his hand to almost anything.”

The Times Law 100 also listed him as one of the most influential lawyers in UK and ranked him in 10th place. A judge said, “Lord Pannick is one of the country’s most powerful advocates.”

Some of his notable clients include:

Last year, in the most famous case in UK, Lord Pannick successfully represented a citizen against the State to require the approval of Parliament before the Prime Minister could initiate “Brexit” from EU.Internationally, he has also appeared in a large number of cases in courts outside of UK: Hong Kong, Brunei, the Cayman Islands, Trinidad and Tobago, Bermuda, the British Virgin Islands and Gibraltar. In Hong Kong, he has appeared in some 15 cases in the Court of Final Appeal, many of them on major constitutional and public law issues.

He became an Honorary Fellow at Oxford in September 2004. He writes a fortnightly column on legal matters for UK’s Times, and is the co-author of “Human Rights Law and Practice”, an important textbook used by many universities on Human Rights Law.

It would certainly be interesting to read Lord Pannick’s legal view on why President Wee should not be counted as the first Elected President of Singapore and why section 22 of Presidential Elections (Amendment) Act is “unconstitutional”.