The Singapore start-up TUTOROO, which provides language instruction online, has found itself in a bit of a pickle on Twitter over a video it made more than a year ago.

In January 2019, it released a video on its Facebook page showing a Caucasian man running after a Chinese girl to get her phone number.

Getting the Phone Number of a Chinese Girl

A British guy asks a Chinese girl for her number, here is how she answers.Teach your mother tongue anywhere with TUTOROO.

In the video, which is called “Getting the Phone Number of a Chinese Girl”, the woman tells the man something that sounds like, “Sex, sex, sex, free sex, tonight”.

Then, in response to his stunned, open-mouthed expression, she keys in her number on his phone as “666-3629”. Later in the video, he teaches her how to pronounce “six” properly.

People seemed to enjoy the video, as it was widely commented on and shared. However, for some reason, it caused a stir on Twitter. Many were unhappy and criticised the misogyny and racism in the video.

Many of the comments seemed to be from Asian women. 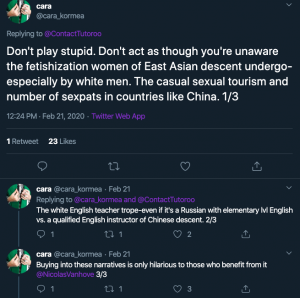 Others joined in the criticism.

However, TUTOROO founder Nicholas Vanhove insists the ad is neither racist nor misogynistic, and the company has maintained an unapologetic stance.

To our Twitter friends out there: 1. We are happy that so many of you took the time to reach out to us today! Most of you didn't know we even existed yesterday. Thank you for that. 2. The video you watched this week on Twitter has been created and shared on Facebook… 1/X

To our Twitter friends out there: 1. We are happy that so many of you took the time to reach out to us today! Most of you didn’t know we even existed yesterday. Thank you for that. 2. The video you watched this week on Twitter has been created and shared on Facebook… 1/X

About 1 year ago. Thousands of people enjoyed it, including the people in our team! 95% of the people working at TUTOROO are from Asia. No one felt discriminated watching this second-degre 37-second movie. 2/X

We believe that YES, the video we made is FUNNY. We believe that NO, it is not racist nor sexist. We believe we can make fun of any language or accent, and we will. Strangely enough, none of the videos making fun of accents such as French, Spanish, Arabic or Hindi ever 3/X

generated any backlash on social media. Funnily enough, only people on Twitter are overthinking the message we tried to convey here. We believe that associating a language to a group of people, or to a country, is nearly a thing of the past. 4/X

We believe in making fun of some situations to highlight problems in our society such as sexism and racism. But we aren’t sexist, and we aren’t racist. Check http://tutoroo.co and discover how many available languages we got. We are proud to connect people from Russia 6/X

with learners in Sydney, Germans with students in Singapore, Chinese tutors with people living in Dublin… Again, we love what we do and our message is simple: teach your mothertongue to people who live in countries where that language is not widely spoken, tear down 7/X

the walls between cultures, languages and nationalities. Love each other, laugh more often, and learn every single day of your life. Thank you. — The TUTOROO Team. 8/8 /TISG