Singaporeans surprised that man can retire at 46 in Singapore 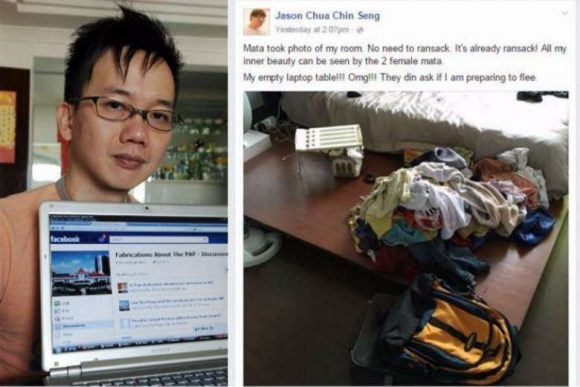 By: Kumar R
The Straits Times reported yesterday (19 June):
“A man who runs a pro-government Facebook page said he was interviewed by the police on Friday (June 17), over two online posts he made on the Bukit Batok by-election that allegedly violated an election advertising ban.
Mr Jason Chua, 46, a retired software engineer who runs Fabrications About The PAP, said in a Facebook post that he was served a letter on Wednesday (June 15) to go to the Police Cantonment Complex on Friday.” – ‘Man running pro-govt Facebook page investigated over Bukit Batok by-election online posts[, ST dated 19 June 2016
Several Facebook users commenting on ST’s sharing of the story in their Facebook, are surprised that someone in Singapore can afford to retire in Singapore at 46 years of age.
Facebook user Joseph Chin said:  “Nice way of saying JOBLESS, retired at 46! Actually i kinda pity him, no real accomplishment in life and whatever he does cannot will never be officially recognised by the ruling party.”
CT Chew said: “At the age of 46, Mr Jason Chua is already retired. Probably Straits Time can invite him for interview session.”
Jeffery Tan Yong Sheng remarked: “Only one question, how on earth did this dude retire at 46! Gonna hustle more man!”
While Vincent Teo commented: “46 retired liao… Wow!”
One recent survey said that majority of Singaporeans are unprepared for retirement at the age of 65.
In February this year, actor Rebecca Lim announced that she was retiring.

She later came out to say that it was just a publicity stunt for insurance company NTUC Income.
NTUC Income’s head of strategic communications, Ms Shannen Fong came out to explain at that time that the whole point of Lim’s post was to emphasise “retiring” as a journey to “retirement”.
“We wanted to introduce the concept of retiring as a journey. Therefore that word was used. If you notice, we didn’t say ‘retiring’ to what. It was very generic,” Ms Fong said.
Adding: “The real intention was to draw attention, and we were hoping for the opportunity like in this instance to be able to articulate what was the real concept of ‘retiring’.”
Retired at 46, Jason Chua certainly has the potential to be NTUC Income’s poster boy for their ‘journey to retirement’ campaign.Follow us on Social Media