Several Singapore youths have recounted their experiences with parents of children who go to prestigious schools in Singapore and have asserted that some of these “elitist” parents treat service staff or students who go to schools that are not considered “good” poorly.

The conversation on Reddit was kick-started yesterday by netizen u/kloimo. A 16-year-old who has just completed her O-levels at a “good school,” the netizen described how shocked she was to find that many parents of students who go to the more elite schools in Singapore were arrogant, when she began working as a sales staff during her school break.

u/kloimo wrote: “I have always been in “名校” (what some consider good schools) since I was in primary school, and most parents of the children I knew in those schools were amiable, pleasant people, so I used to refute the stereotype that parents from more elite schools were arrogant.

“My view changed in less than a week of work. I hate to admit it, but most of the difficult parents are those whose children are from the “good schools”.

“On my first day of work, I had a nasty parent who openly told her son “You have to wait, she’s not smart you know.” simply because I had to confirm that the sample size I gave them was correct with the full time workers at the counter.”

Recalling some of the attitudes she faced from parents of students who attend the more elite schools in Singapore, the netizen added that she is usually treated more kindly when parents realise she also attends a good school:

“The parents are nice to me (their tone actually does a 180) when they ask me which school I go to and find out that I’ve already accepted an offer from a “good” JC. Are they implying that they’re only nice to me the moment they find out that I’m going to a “better” school than their child? Your child’s brand of school doesn’t make you any better than others.

“Over the last 5 days, I realised that many of the parents who were nice to me in school were probably nice only because they know I’m at the same level and their child and would like their children to be treated with respect as well.”

u/kloimo concluded: “I’m not trying to say “all schools are equal” and I understand that elite schools exist to separate children of different levels of intelligence so that they can learn better amongst peers that are similar to them.

“I just hope that people treat others with more basic respect, there’s no need to turn your child’s education into some complex politics. Please teach your children to be nice to people, and do it by setting a healthy example.” 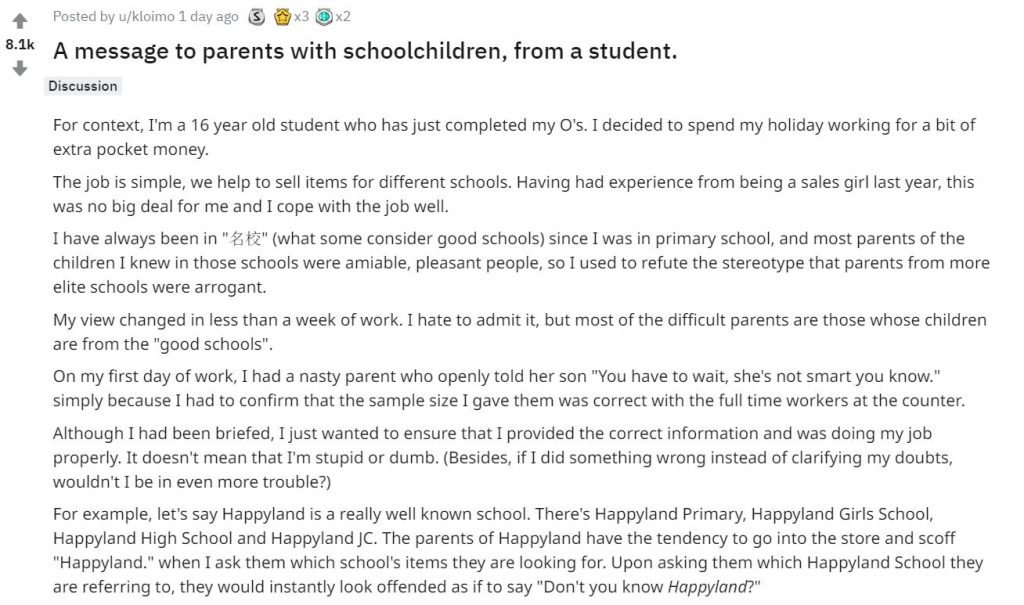 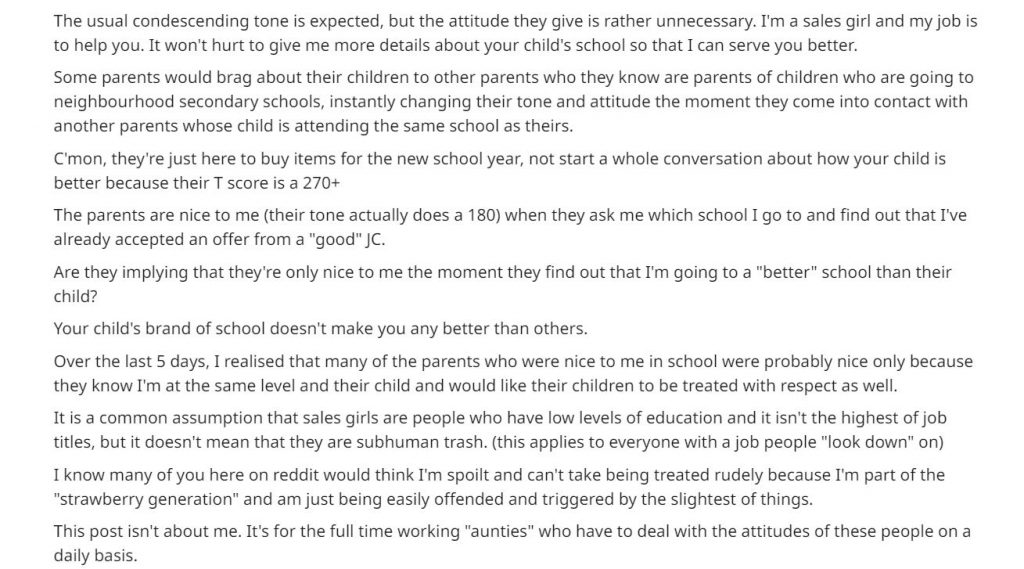 The teenager’s post sparked intense discussion on Reddit. Several youths came forward and shared similar stories of how parents of students who go to the “good” schools discriminated against service staff or students who do not go to the more elite schools: