I came down with flu yesterday and had to see the doctor. The bill came up to quite a hefty sum.

So it set me thinking – you feel very insecure to see a doctor in Singapore. It is so expensive here and there is no cap on how much Singaporeans and the people living in Singapore have to pay for healthcare.

So, I decided to take a look at what the other Asian Tigers (Hong Kong, Taiwan and South Korea) and Japan do with their healthcare system.

This is what I found.

In Hong Kong, there is a cap on how much you have to spend on healthcare. In Singapore, I had to pay more than S$100 when I go to A&E. In Hong Kong, this is only less than S$20.

There is also a cap in Taiwan – you only need to pay S$6 to go to A&E at a district hospital and less than S$13 at a regional hospital. It is even cheaper if you are not going to A&E.

To see a doctor at a clinic, you just need to pay S$2.

There is also a cap on hospital bills of S$2,340 every year in Taiwan. You do not have to pay more than that if your bill goes above that.

In South Korea – again, there is a cap! – you do not have to pay more than $1,340 a year for all healthcare if you have an income grade of Grade 1.

Not only that, the cap, or the ‘Cost-Sharing Maximum Amount’ can be combined and shared among members in the same household, and the cap is also reduced for longer term recurrent health needs.

Then I looked back at Singapore.

There are no caps as to how much Singaporeans have to pay (and pay).

Instead, there are limits to how much Singaporeans can claim!

You can only claim a limited amount from the Medisave health insurance.

You can only claim a limited amount from the MediShield Life health insurance.

Which means that because there is no cap on how much Singaporeans have to pay for healthcare, they can go broke. 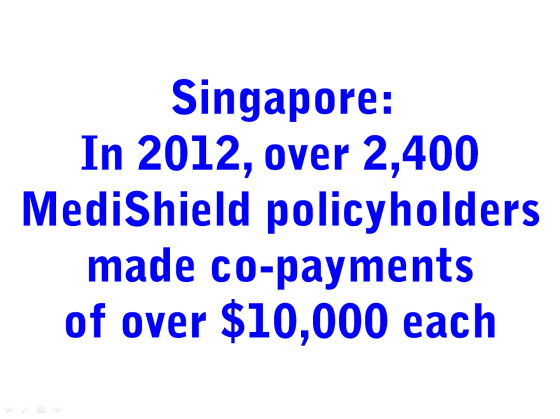 These co-payments can be financially crippling on their own. Would MOH (Ministry of Health) explore the introduction of an annual cap on out-of-pocket co-payments made by each patient. Any medical bills above the cap would be borne by the Government.

Such schemes are a feature in most developed countries, including Japan, South Korea and New Zealand. It is also one of the key consumer protections in the Affordable Care Act in the US.

An annual cap on out-of-pocket payments will limit the financial risk that individual patients are exposed to, and help allay the anxiety of many Singaporeans about uncertain medical expenses.

He said that this is because “any expenses above the cap will be “free” to the patients“. 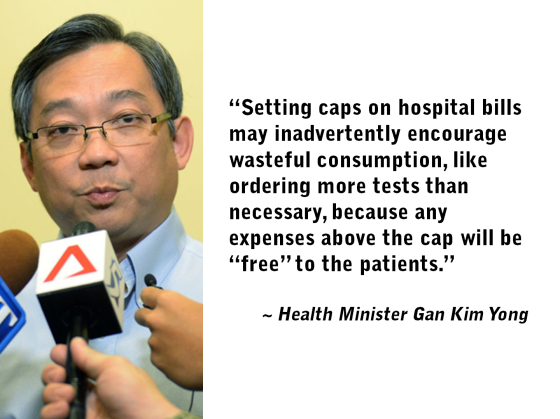 But where more than 2,400 Singaporeans have to pay more than S$10,000 for their hospital bills and where many cannot afford, can such an argument be justified?

From the Government’s perspective, co-payments are necessary to discourage over-consumption. The Government’s fear is that “free” healthcare will escalate costs, and become fiscally unsustainable.

However, people do not consume healthcare like they do other goods and services. Most people visit doctors rather grudgingly – usually when they fall sick and have obvious symptoms. Demand for healthcare is therefore not unlimited.

The lesson from these two experiments, is that if co-payments are too high, poorer patients may be deterred from seeking necessary treatment. Similarly, it is difficult enough to get patients to adhere to their prescriptions, and high co-payments could make it even harder. This could have knock on effects like higher rates of hospital re-admissions, which will cost both the patient and the system more in the long run.

The Government’s claim that no one will be denied healthcare because of inability to pay is cold comfort for some Singaporeans who regularly forego medical appointments or cut back on prescribed medication because of the high costs and the difficulty in obtaining financial assistance.

Which is why the Singapore Democratic Party (SDP) proposes a cap of $2,000 on hospital bills – Singaporeans should not need to pay more than S$2,000 for healthcare in a year.

And if you have to go to the hospital every year for a chronic or recurrent illness, the SDP proposes that from the third year onwards, you would not need to pay more than S$500 a year.

The SDP wants to make lives better for Singaporeans. 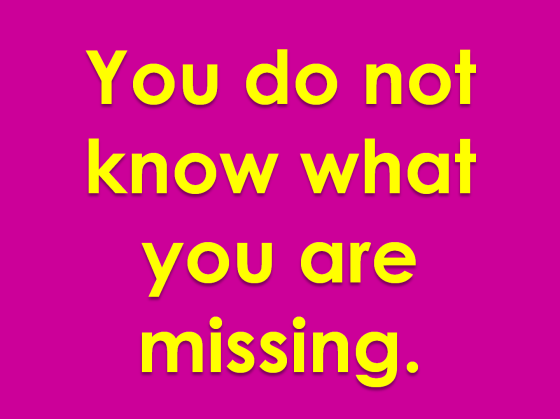 Why did you choose to hurt yourself?