Singapore Land Authority bashes Leong Sze Hian on land issue: “You seem to think that you are entitled to a different and special treatment” 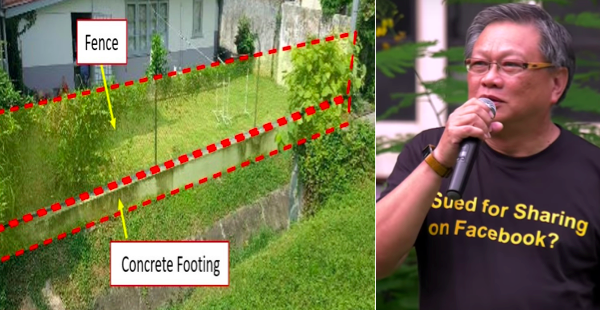 A series of Facebook posts between blogger Leong Sze Hian and the Singapore Land Authority (SLA) show the latter becoming increasingly agitated over a land encroachment issue, to the point where the SLA told Leong that his “post contains deliberate untruths, and half truths”.

On August 16, Leong Sze Hian shared a series of email exchanges between himself and the Singapore Land Authority.

In one of the emails, the SLA asked Leong when he planned to remove the encroachment of the rear boundary wall and fence from State Land.

Leong shared photos of the emails and asked his Facebook friends, “Knock down & rebuild wall of 64-year old home – encroachment of state land 1.3 cm to 4.9 cm. Any advice, suggestions or help, would be greatly appreciated”. 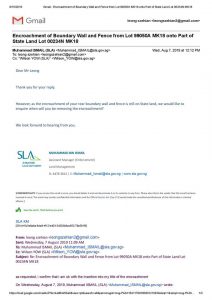 The next day (August 17), the SLA replied to Leong. They said, “You must know that your post contains deliberate untruths, and half truths”. 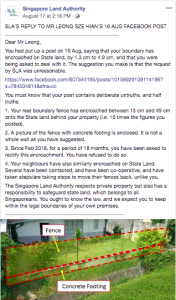 They also outlined the following points,

“1. Your rear boundary fence has encroached between 13 cm and 49 cm onto the State land behind your property (i.e. 10 times the figures you posted).

The SLA added that unlike Leong’s suggestion that an entire wall had to be torn down, they were asking for a fence with concrete footing to be removed.

Leong responded yesterday (August 18) alleging that the diagram SLA sent him was inaccurate. “If there is a huge 49 cm gap, shouldn’t the line be far away from the wall?! That’s also why I thought the gap was small (4.9 cm)” he wrote. He also added that in SLA’s diagram, the measurements given were 0.13 and 0.49 without a unit of measurement. “It just used figures without references. I was under the impression that it was 1.3 cm and 4.9 cm”, he said.

Yesterday, (August 18), the SLA replied rather irately to Leong saying, “You are adding to the untruths that you have been putting out” “We sent you a letter on 5 Feb 2018. It enclosed a diagram (below). The diagram will show that you are telling untruths”.

The points they outlined were as follows:

“1. The total area of encroachment is clearly stated as 3.7 sq m. You could not have thought that the encroachment was 1.3 cm/4.9 cm.

We have been discussing this for 18 months. Your neighbours understand, and have been co-operative. Four have removed their encroachments completely, while the last remaining is (sic) taking steps to do so”.

The SLA concluded their post to Leong saying, “You seem to think that you are entitled to a different and special treatment. That is not possible”.