Wearing open-toed shoes to official events is widely considered inappropriate. Despite this, open-toed sandals seem to be Mdm Ho’s preferred choice of footwear no matter where she is – even if she is accompanying her husband at official events in Singapore and overseas.

Mdm Ho’s choice of footwear at official events has been criticised as “sloppy” and “disgraceful” by several Singaporeans.

In 2016, several Singaporeans said that Mdm Ho’s decision to wear open-toed sandals as she visited the White House with PM Lee in an official visit was embarrassing. Netizens were quick to point out the difference in dressing between former US President Barack Obama’s wife, Michelle Obama and Mdm Ho. 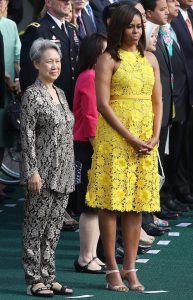 Among others who criticised Mdm Ho Ching then was aesthetics doctor and Save our Street Dogs founder, Dr Siew Tuck Wah, who commented:

“Its a historic occasion for Singapore Prime minister Lee and wife Ho Ching to be invited to the White House. But while first lady Michelle Obama made headlines with a Naeem Khan bright yellow floral dress, Ho Ching really could have chose something, well, more cheery.”

A year later, Mdm Ho again wore open-toed sandals as she visited the White House with her husband and a delegation from Singapore, when they made an official visit to the US to meet current US President Donald Trump.

Last month, Mdm Ho sported open-toed sandals and stood apart from the other women who wore appropriately covered shoes as she accompanied her husband at the President’s Annual Diplomatic Reception 2019, which was attended by nearly 300 heads of diplomatic and consular missions as well as representatives of international organisations.

Asserting that wearing open-toed shoes to such events is a strict etiquette no-no, Facebook user Elisa Boon wrote online then: “When I was modelling, we were taught how to dress, behave and professional etiquette. And for shoes, usually basic rule “Keep it neutral, keep it classy, keep it covered”.

The latest photo showing Mdm Ho sporting inappropriate footwear at official events have led to some netizens commenting that she needs a stylist or personal image consultant: