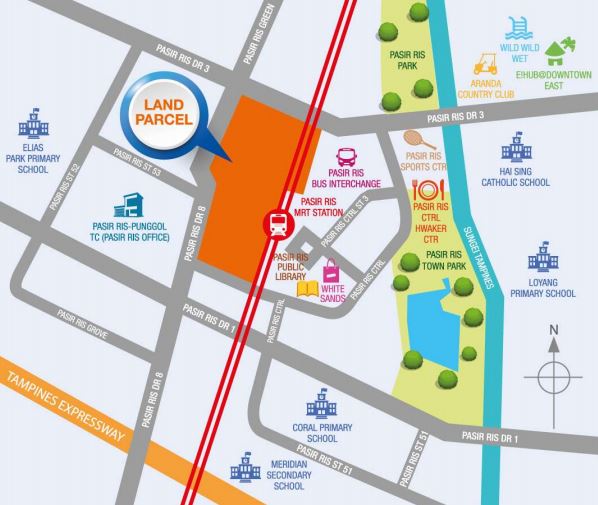 The Housing & Development Board (HDB) on August 27 announced that it has launched a White site at Pasir Ris Central for sale by public tender  under the Confirmed List of the Government’s residential land sales rogramme. The site is proposed for a mixed-use development which will comprise a commercial and residential development integrated with a bus interchange, a polyclinic and a town plaza. The site can potentially yield a maximum of 600 private residential units. This mixed-use development is one of the Remaking Our Heartland (ROH) plans for Pasir Ris Town, which were unveiled in April 2017.

HDB said that it would adopt a Concept and Price Revenue tender system to evaluate the tenders received for the site at Pasir Ris Central. This tender approach is adopted to shortlist quality development concepts with seamless integration of amenities and well-designed public spaces.

In tabulating the first half GLS programme with the 2nd for easy comparison, JLL said that it was uncertain as to whether the residential land sales programme will mitigate optimistic land prices.

JLL noted that in the 2H2018 confirmed list, there are only 3 private residential sites and a white site supplying 2,010 units, a 14% decline from the 2,325 units supplied by 5 private residential sites under the 1H2018 confirmed list. It said that the moderation is probably due to concerns of oversupplying the market since the buoyant collective/en bloc sales market is generating the bulk of future supply.

Between 2H2016 and 1H2018, the Government’s residential land sales programme will generate about 30 per cent of the units to be developed while some 70 per cent will be from collective/enbloc sites.

“The focus of the 2H2018 residential GLS seems to be on the central region which accounts for 79% of collective sale sites sold in 1H2018 to-date. Although the three GLS sites could help to meet demand from developers, it is uncertain as to whether they will mitigate optimistic land prices. They are also unlikely to dilute demand for collective sale sites, especially those in the prime districts for which there is keen interest.”

In noting that the white site at Pasir Ris Central which was included in the 2H2018 confirmed list, JLL said that the site was capable of generating 35,900 sqm of commercial space and 535 private residential units. Located next to the Pasir Ris MRT station and bus interchange, the development is slated to be a future major retail mall in the area.

JLL noted that “sites for office development remained absent in the confirmed list in spite of the continued strengthening of CBD office rents. The government is likely to be hoping for demand to spill into the decentralised market in an effort to bring job opportunities closer to homes. This is reflected in the placement of a white site capable of yielding minimally 50,000 sqm gross floor area of office space in Woodlands Square/Woodlands Avenue 2 in the Reserved List.”

In noting that a site for hotel development (390 rooms) is included in the 2H2018 confirmed list, JLL said, “the last time a site with a hotel component was included in the confirmed list of the GLS programme was 7 years ago in 2H2011. The current hotel site comes on at a time when the economy has improved, healthy tourist arrivals have been recorded and the Trump-Kim summit has been successfully hosted.”

There are concerns from certain quarters that the Government’s residential land sales programme coupled with the buoyant en bloc market, will lead to an oversupply of residential properties in Singapore.

Prominent finance commentator Ryan Ong has previously said: “The Singapore government is very fair, they simply want the highest prices for the land. They do not care if you have to pay through the roof for your house as any land sales goes to Government Reserves.”

Are you interested in residential land sales but ensure of funds availability? Don’t worry because iCompareLoan mortgage brokers can set you up on a path that can get you a commercial loan in a quick and seamless manner.