Resident to Jamus Lim, “We just want to be heard”

Mr Lim said that 'Miss Vicky's' words stuck with him for the remainder of the evening, even when he talked with another family, the Lims, who feel the same way

Singapore—Like other Members of Parliament, the Workers’ Party’s (WP) Jamus Lim has been making the rounds doing house visits and sharing stories about the residents he has met in the process.

The comment of one woman, a ‘Miss Vicky,’ resonated with him more than usual, when she said, “We just want to be heard.”

Mr Lim is part of the WP team that won in Sengkang GRC in July’s General Election, and represents the residents of Anchorvale. The MP, who is an associate professor of economics, shared in a Facebook post on Saturday (Oct 10), that Miss Vicky talked to him about “her concerns for the future of Singapore.”

“We touched on a number of topics, including why residents seek help from MPs, to the greater open-mindedness of the younger generation to change, to changes she would like to see in the estate. But the bottom line, in her words, was that ‘We just want to be heard,’” wrote Mr Lim.

In house visits last Thursday, we spent some time chatting with Miss Vicky, who invited us into her home and shared with…

He added that her words stuck with him for the remainder of the evening, even when he talked with another family, the Lims, who feel the same way as Miss Vicky does, “(albeit this conversation was in Mandarin and my fraying Hokkien), that they wished that the people had a greater voice.”

The MP posted a photo of a gift from Mr Lim, a decades-long Green Spot factory worker, adding that despite being advanced in age, he “still felt compelled to work in his sunset years, so as not to be a burden on his children.”

Responding to what he heard from Miss Vicky and the Lim family, the WP MP pledged, “We will continue to work hard to be a voice for the people.”

Netizens commenting on Mr Lim’s post echoed the sentiments of the residents.

One wrote, “People want to be heard….MP job is to speak for the people.”

Others thanked him for ‘listening.’

More than one netizen expressed that they were jealous of Sengkang residents for the MPs that they have.

One netizen even listed what he called “pressing concerns” of netizens. 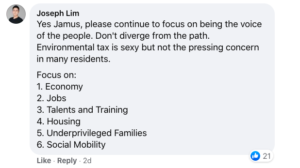