She tells Yahoo News: Feud over Lee Kuan Yew's will has brought her immediate family closer 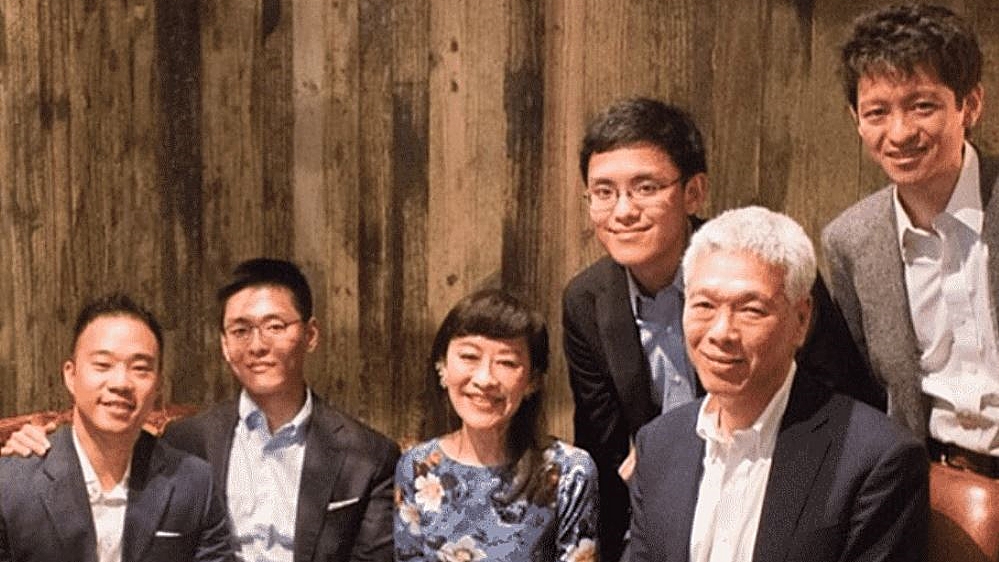 Singapore — In a rare interview with Yahoo News, Lee Suet Fern says the family feud  between her husband Hsien Yang and his elder brother Hsien Loong, the Prime Minister, has brought her immediate family closer.

In the interview, which was conducted over three meetings, Suet Fern recalled how she fell in love with Hsien Yang and how he put her first throughout their relationship.

Suet Fern’s connection to the Lees goes back decades, from the time her father, Professor Lim Chong Yah, tutored Hsien Loong, and later Hsien Yang, for their A-Level examinations. Although Suet Fern and Hsien Yang were contemporaries in National Junior College, they drew closer while they were studying at Cambridge University.

Recalling how Hsien Yang would take long cycle rides between their respective colleges to see her, sometimes multiple times in one day, she told Yahoo’s Nicholas Yong with a laugh:

“Yang was one of many young men who turned up at my door. I joke that he didn’t have much choice, there were so few girls in Cambridge in the 70s. He jokes that I fell for him, largely because he cooked so well for me. He also claims that he was persistent enough that, over time, the others just gradually fell away.”

The romance bloomed and led to marriage in July 1981, when she was 23 and he 24. Sharing that their marriage took place quickly, mere days after she took her final law exams and returned to Singapore, Suet Fern said: “I think that we married young, perhaps as a result of some amount of parental pressure.”

She also recalled how their wedding, which involved a small ceremony at the Barker Road Methodist Church and a large reception at the Istana, was an “impersonal” one where she “shook hands with hundreds of people I did not know”.

She shared that the bridal car was her husband’s first car, a Honda Civic, and that she wore lipstick that she had purchased at a Boots store in England as there was no one to do her make-up or hair. After the ceremony, Hsien Yang cooked his bride a steak for dinner.

Yahoo reports that Suet Fern’s tone was “playful, almost girlish” when she spoke about her romance with Hsien Yang. Referring to her husband’s time as a brigadier-general in the Singapore Armed Forces, she giggled and told the publication: “I loved him in uniform. I thought he was so handsome. I used to think, oh my goodness, what a heartthrob.”

On whether she had second thoughts about marrying into the famous Lee family, Suet Fern said: “I was young, I was in love, and I thought, then as I think now, that Yang’s a really special individual. I never married the family, I married him.”

Likewise, Hsien Yang remained devoted to his wife and put her first. When the couple were living in Cairnhill Mansions after their marriage, Suet Fern confided in her husband about how lonely she felt when he was away for military training and how frightened she was of her mother-in-law, Kwa Geok Choo.

Instead of dismissing her feelings, Suet Fern said her husband “just gave me every assurance that it was him that I married and not his mother, and that he would always put me first”.

Suet Fern said that she also had “huge support” from her husband in her career and said: “It takes a special man to allow his wife to work all night in the office. And he often put up with a house not being perfect, and he never complained.”

Aside from not complaining, Hsien Yang also pitched in to share the load of caring for their sons while his wife struggled with the demands at work and parenting. She said with a laugh that Hsien Yang initially did not know how to change a diaper: “He did an awful job and he kept saying, ‘Be patient with me. I’m a Lee. I need to learn this’. And he got better and better.”

Suet Fern revealed that the bonds within her immediate family have been strengthened in the past few years, amid the Lee family feud that erupted after patriarch Lee Kuan Yew passed away in 2015.

In June 2017, a dispute among his three children over his last will spilled into the public domain. Hsien Yang and his sister Wei Ling accused their elder brother, Prime Minister Lee Hsien Loong, of abusing state organs for his benefit.

Hsien Yang’s eldest son, Shengwu, was later accused of contempt of court by the Attorney-General’s Chambers over a private Facebook post. Shengwu, a Harvard academic, was eventually fined S$15,000, which he paid in order to “buy some peace and quiet” while maintaining that he did not admit guilt.

The AGC also lodged a complaint against Suet Fern for her involvement in Lee Kuan Yew’s will. She was censured by a Disciplinary Tribunal for grossly improper professional conduct in the case and appealed against the decision to the Court of Three Judges. Judgment has been reserved on the case.

Referring to the initial accusations her husband and sister-in-law had levelled against their brother in 2017, Suet Fern told Yahoo: “I didn’t wake up like everybody else and was absolutely surprised.”

When asked how she feels about her family being in the spotlight, the lawyer said: “What has happened in terms of publicity is something we don’t welcome at all. We clearly don’t like (the attention) but this is what has happened.”

While she indicated that she “hopes that there will be fairness and justice” with regard to her appeal, Suet Fern revealed that her immediate family has emerged “better and stronger” from the saga.

Expressing pride over the way her sons responded to the saga with maturity and thoughtfulness, she said: “We’re closer than we’ve ever been before. And I’m incredibly proud of my husband and my sons, in different ways. I love that our sons have stood by their father and me throughout.

“I’ve learned that they are strong, very wise, mature and thoughtful, have better insights on Singapore and the world than I would have ever imagined. We have come to deeply value their perspectives.” /TISG