She recalls his tirade against Islam in class

Singapore—A former student of disgraced Ngee Ann Polytechnic lecturer Tan Boon Lee posted on social media about an “unsettling” experience she had in class a few years ago, which ended with her walking out of class. 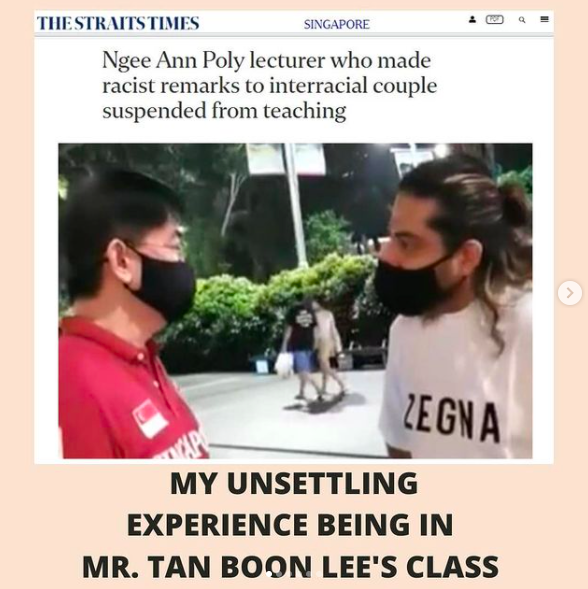 She wrote that the “discourse about Islam…escalated so badly” that she “ended up sitting outside on the floor of the corridor” with another classmate, “waiting for his unsettling speech to be over”.

The young woman also shared her Instagram stories from the day of the class, which clearly show how upset she was. 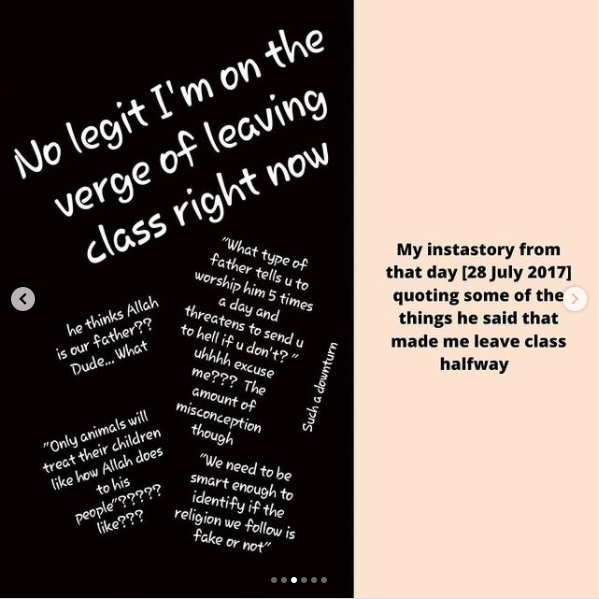 She wrote that at that point she was only 17 and “fresh out of 10 years of madrasah trying to assimilate into the new secular environment.”  Moreover, she was the only Muslim in class.

During the class, Mr Tan “opened websites on the projector, pointing out things he didn’t agree with about the Quran and Prophet Muhammad s.a.w to the class.”

“Everything I quoted him say in the 3rd slide were barely the tip of the iceberg. I remember being livid. I remember trying to build up the courage to finally make a complaint. I remember nothing happening,” she added.

At one point in the class, Mr Tan pointed to her in the front row and asked her if she agreed with what he was saying. She wrote, “I could barely open my mouth amidst his continuous sweeping statements.” 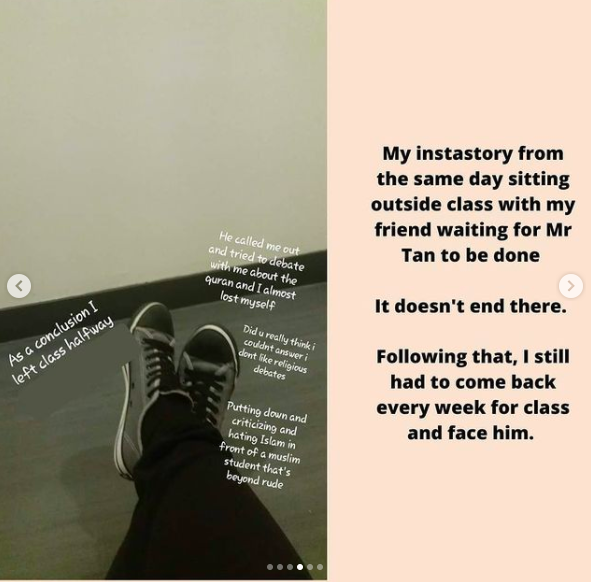 The woman underlined the danger of having people such as Mr Tan as teachers, given the young age and impressionability of the students. She added that since he is a senior lecturer, it is highly likely that he has made similarly “racist and Islamophobic” remarks throughout his teaching career.

She also cautioned that he may return to teach again after his suspension from Ngee Ann Polytechnic is over.

The former student made no bones about how she feels about the matter.

“He should not be allowed back. I repeat. A racist Islamophobe has no place educating our youths.”

And while she believes that the study of different religions is important for social harmony, “Taking the information at face value and making these kinds of sweeping misconceptions may lead to a false understanding of what Islam truly means. This lack of understanding causes certain strife, prejudice, and racism in what we see today.”

She decided to tell her story when Mr Tan was revealed to be the man in the viral video who told a Chinese-Indian couple that it’s “racist that Indians marry Chinese because it is predatory”.

“More people are coming out to testify. More people are showing support. We may still be far from utopia but the fact people are thinking, trying and taking action means we are definitely on the right path,” she wrote.

“It is not enough to be anti-racist.

“It is not enough to be neutral.

“We need people to step up, stand up and speak out against racism.”