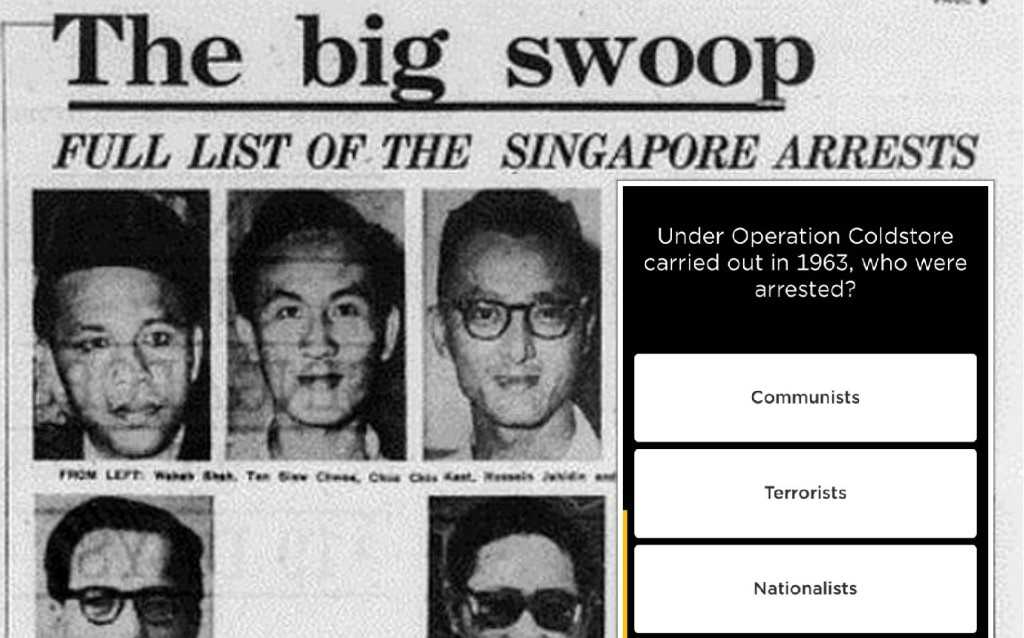 Operation Coldstore was a covert security operation carried out exactly 55 years ago, on 2 February 1963, in which the authorities arrested over 107 individuals and detained these individuals without trial, under the Preservation of Public Service Security Ordinance (PSSO).

The 107 detainees – including students, trade unionists, civil society players and politicians – were branded as communists by the authorities who claimed that the operation was “aimed at crippling the Communist open front organisation” that allegedly threatened the nation’s internal security.

These allegations have been the subject of considerable criticism by several noted historians and former detainees. Prominent individuals have cast aspersions against the legitimacy of the government crackdown, asserting that Operation Coldstore was politically motivated.

Among other historians, Dr Thum Ping Tjin asserted, “historiography is clear on the lack of evidence of a communist threat,” while another historian, Dr Hong Lysa argued that if colonial records did contain concrete evidence that Lim Chin Siong – one of the most prominent detainees – was a communist, “that would have been brought to light from the start, and not fester as a thorn in the PAP’s flesh even 50 years later.”

Former detainees have also condemned the allegations. Ex-detainee Said Zahari, a journalist, said that the operation was used to weaken opposition to Singapore’s ruling party and revealed that “the Communist Party of Malaya in Singapore was no longer active” at the time.

Further, declassified British archival documents confirmed that there was no evidence that the detainees were acting under the instructions of Moscow or Beijing, as had been alleged by the authorities.

A transcript of Lim Chin Siong’s speech at a contentious protest has also turned up in the UK’s National Archives. Lim was once believed to be a top contender to lead Singapore but his promising career was subverted when he was detained during the covert Coldstore operation.

A transcript of the speech that Mr. Lim made in 1996 refutes allegations made against him that he had instigated and advocated subversion and violence against the government – a charge that was used to detain him.

In spite of these revelations, one of the questions asked on the “Singapore” quiz on Iceland-based Quizup is, “Under Operation Coldstore carried out in 1963, who were arrested?”

Players have ten seconds to choose one of four answers: “Communists,” “Terrorists,” “Nationalists,” or “Fascists”.

The “correct” answer that the game accepts is “Communists”.

Quizzes on the trivia game are user-created and questions are user-submitted as well. It is possible that whoever included the above question and options is one of many individuals swayed by the official narrative of a sinister conspiracy.

As far as the official narrative is concerned, the Singapore Government continues to insist that Operation Coldstore was not politically motivated, 55 years after the operation began.

Minister of State in the Prime Minister’s Office, Sam Tan Chin Siong, told the press that such contrarian views shared by historians “downplay the communist threat to Singapore in the 1960s.” He added: “Revisionist historians and their proxies have resorted to defending their claims on the grounds that these were ‘peer reviewed’, but they have not been able to deny or refute the contrary sources and overwhelming evidence that demolish their thesis.”

The Government also continues to reject calls to release Singapore’s own secret historical documents so that the facts behind the detentions can be better understood.

When opposition parliamentarian Low Thia Khiang asked for documents such as Cabinet Papers pertaining to Operation Coldstore to be released in portions to the public, the Government responded that releasing such documents may not lead to “good governance”.