The Independent Singapore News
Home News Featured News POFMA should only be for clear cut cases of falsehoods, not for...

POFMA should only be for clear cut cases of falsehoods, not for interpretations of statistical data, says SDP

Secretary-General of the Singapore Democratic Party (SDP) Dr Chee Soon Juan and Vice-Chairman John Tan both took to social media reiterating the arguments they presented in court despite an unfavourable ruling.

On Wednesday (Feb 5), the High Court dismissed the SDP’s appeal to set aside Correction Directions issued against it under the Protection from Online Falsehoods and Manipulation Act (Pofma).

Calling the party’s statements “false in the face of the statistical evidence against them”, Justice Ang Cheng Hock, said that it had not challenged the accuracy of the Ministry of Manpower’s (MOM) statistics, but instead “sought to critique it on other grounds” that he did not find convincing.

Despite this ruling, both Secretary-General and Vice-Chairman took to social media to comment.

In his Facebook post on that day, Dr Chee wrote: “We are, of course, very disappointed with the verdict”.

He added: “We note, however, that the Judge had written that the role of the court in this context is to interpret the legislation and “In that sense, the Court is constrained by what the legislation compels.”

We also note that the Judge had pointed out that “Unlike the Minister, who is able to rely on the machinery of the state to procure the relevant evidence of falsity, the maker of a statement often has to contend with far more limited resources”.

Not backing down, Dr Chee wrote: “We reiterate our case which we argued in Court: POFMA must only be applied to clear cut cases of falsehoods, not for interpretations of statistical data”. 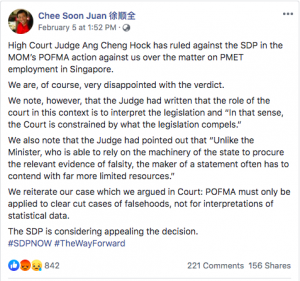 Similarly, in another Facebook post, Mr Tan wrote that he “studied statistics for about 10 years and taught it for another 20 years. But the judge, who is not trained in statistics (he might have taken a course or two while in school), can simply dismiss my arguments as “false in the face of statistical evidence.””

He added: “I should have studied law… because then, you can judge anything under the sun, including a complex subject such as statistics, even if you haven’t studied it”.

Refuting the SDP’s statement that local PMET retrenchment was rising, the Ministry of Manpower said the number of retrenched local PMETs had declined since 2015. It also said that the graphic the SDP published was wrong and that the ministry’s Comprehensive Labour Force Survey showed that local PMET employment had risen steadily since 2015.

On Dec 16, while the SDP complied with the Pofma Correction Directions and posted correction notices on its article and earlier Facebook posts, it said that the conclusions that Manpower Minister Josephine Teo had come to were “disputable”.

On Jan 3, the SDP applied to the ministry to have the corrections cancelled, which Mrs Teo rejected.

The SDP then filed its court challenge on Jan 8. /TISG