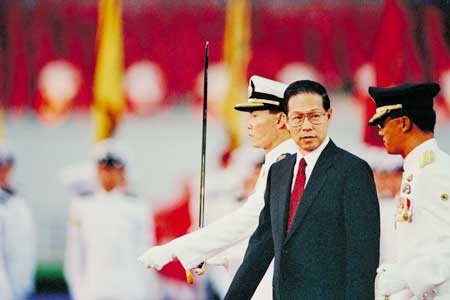 The partial amnesia about the late Ong Teng Cheong is rather true to form when it comes to bits of history the government wish us to forget. Like the events in the early part of the 1960s or that Singapore was already highly developed, not a fishing village before independence. It is like an ancient Roman custom.

Damnatio Memoriae (Damnation of Memory) was a Roman punishment of prominent persons by erasing them from memory such as scratching away public inscriptions, reworking of statues or mutilating the faces of their images. In modern times, totalitarian regimes do this by removing the condemned person from films, photographs and public records.

The first picture is the most famous. The erasure of Nikolai Yezhov, Stalin’s head of the NKVD the state internal security organ, the man who executed the Great Purge or the Great Terror in the 1930s and himself became one of its most prominent victims.

The next picture is that of Bo Gu, one of the 28 Bolsheviks or socalled Returned Students, Chinese communists who followed the Marxist-Leninist precepts of urban revolution in opposition to Mao’s peasant revolution. Erased after he died in a plance crash in 1946.

Most recently Jang Song Thaek, executed by his nephew Kim Jong Un and erased from all records.

It is rewriting or reshaping history by removing inconvenient bits of it.