He added that while he “fully understood” why his restaurant was included in the list, he “expected SFA and SPF to have done their homework before starting their sting operation.

Singapore — No doubt about it, the pandemic has taken a sizable economic toll on Food and Beverage establishments, and the recent reimposition of restrictions in the wake of the Jurong Fishery Port and KTV lounge Covid clusters have only deepened their difficulties.

Unfortunately, what made it even harder for one restaurant owner was when authorities shut down his establishment on the presumption that it was one of the “nightlife venues that pivoted to F&B establishments”.

Mr Goh Tong Hann wrote about his experience in a letter published in The Straits Times Forum on Tuesday (Jul 20).

“It has been blow after blow for the food and beverage industry in Singapore, and while I understand that many of the measures taken are necessary, the situation could have been handled better.”

He wrote that he had “opened the restaurant of my dreams,” at the beginning of the year at a venue that used to be a nightclub in “a prime downtown area.”

However, Mr Goh and his team encountered a problem last week.

“Moments after the revised regulations came out last week… we were visited by plain-clothes members of the Singapore Police Force (SPF), asking us to shut down our business operations by 10pm on a busy Friday night.”

He wrote that they were given less than an hour to shut down operations.

When he asked why, he “received three responses – ‘Haven’t you seen the new regulations?’, ‘Didn’t SFA (Singapore Food Agency) send you a message;” and ‘You are on the list that I have.’”

When the restaurant owner checked the flier the policeman had given him, he saw that it was addressed to “nightlife venues that pivoted to F&B establishments”.

Realising that his restaurant did not fall under this category, he proceeded with operations that night, only for the policeman to return at 10pm to shut down the establishment.

He added that while he “fully understood” why his restaurant was included in the list, he “expected SFA and SPF to have done their homework before starting their sting operation,” explaining that his establishment is completely new and has all the documentation to prove this.

“A simple search would have shown that we were in no way related to the previous occupants of the unit,” he wrote, adding, “My team and I endured an anxiety-riddled 24 hours, wondering whether to shut down the restaurant since none of the relevant agencies was contactable over the weekend.”

They chose to remain open the following night, and only received a call from the police at 8 pm that they would be officially allowed to open.

As can be expected, netizens did not take too kindly to Mr Goh’s restaurant’s closure, however temporary. 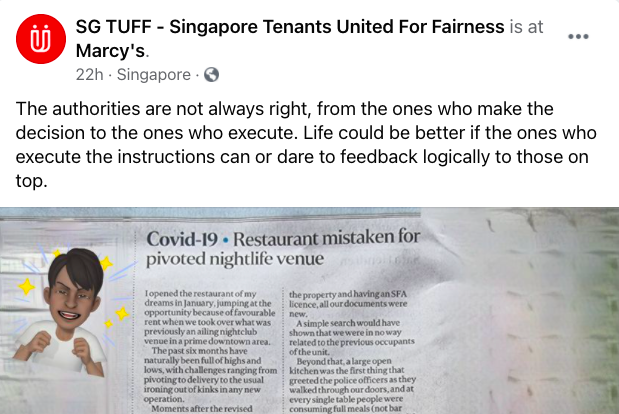 Former ST editor Bertha Henson even asked if the authorities had apologised to Mr Goh.

Read also:  Lim Tean: What economic benefits does Singapore derive from granting KTV operators a $50K grant to “Pivot” into an “F&B” outlet?