The Independent News
Home News On carbon tax: Calvin Cheng to Jamus Lim, “This is not how...

On carbon tax: Calvin Cheng to Jamus Lim, “This is not how the real world works”

Singapore—In Parliament on Monday (Feb 1), MP Jamus Lim (WP-Sengkang GRC) proposed a higher carbon tax which would make sure that Singaporeans would have a greater understanding of the costs of climate change.

He also suggested that the revenues from carbon tax could go toward a “green fund” for more sustainable endeavours or to offset other taxes as a rebate.

Unsurprisingly, his proposal did not go over well with certain people, including former Nominated Member of Parliament Calvin Cheng, who claimed that Dr Lim proposed solutions as an academic, and not from a practical standpoint.

After Dr Lim had made his speech in Parliament, the MP explained his points further in a Facebook post on Tuesday (Feb 2), beginning by writing, “Nobody likes taxes.”

He wrote that Singapore ranks 26th out of 142 countries worldwide when it comes to greenhouse gas emissions per capita, similar to countries that produce energy.

Therefore, what is needed is “a tool that provides incentives for a shift,” which would be emissions taxes.

According to the MP, these “are the simplest, cleanest (no pun intended) tool to do so.”

And because taxes tend to hurt those who have less, Dr Lim also suggested a rebate programme for them.

Beyond this is the endeavour to reach the societal objectives of making the shift to becoming more environmentally aware.

“We are encouraging households to buy products that are greener. We also provide incentives for business to change their practices to be more green, to avoid the tax. And at the economywide level, we are pushing out brown industries in favor of green ones. So this plan can be revenue neutral, even as it achieves important societal objectives.”

Mr Cheng commented on Dr Lim’s post, writing that having people shift their jobs to renewable energy industries is not a simple matter.

“People who lose jobs in fossil fuel industries cannot suddenly be retrained to take jobs in renewables. It’s a different skill set. This is not how the real world works.” 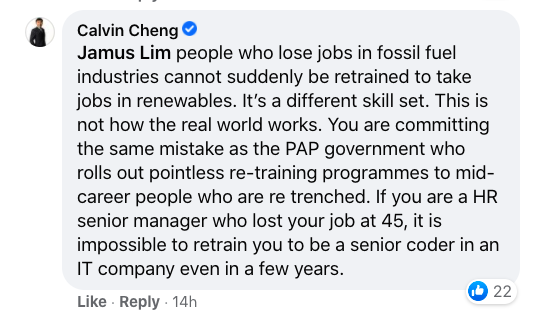 On his own page, Mr Cheng wrote a post criticising Dr Lim’s suggestion, writing “The problem with Jamus Lim is that he talks about policies as an academic, without what SM Tharman calls ‘practitioner’ experience.”

Instead of shutting down Singapore’s oil and gas industry, he added, why not open renewable industries in the country, and “and make these jobs attractive to a new generation of younger workers.”

He also wrote, “Talking about using carbon tax and rebate policies to force a shift in industries is idealistic and impractical.

This is the real world, not a classroom.”

Dr Lim answered Mr Cheng, agreeing that the shift to renewable energy would “not be seamless nor easy,” which is why both the supply and demand side would need assistance. Which seemed to spur the former NMP to issue a challenge: