“Singaporeans don’t pay a lot of attention to the origin and quality of the primary ingredients, which is a paradox to me as from good ingredients results tasty and healthy food,” and signed off as “a French girl who loves Singapore, Singaporean food, and NUS!”

Singapore—Being in a foreign land is not always easy, given the abundant cultural differences that can lead to miscommunication, misunderstandings and the like, as one young French woman who is currently on an exchange student programme in the country can attest to.

Good thing netizens willingly jumped in to enlighten her.

The young woman’s post was published on the Facebook page NUSWhispers on Monday, December 10. In it, she seeks to not only share what she termed as a “bad experience” at a hawker centre, but also to find out how Singaporeans view what happened.

She writes that she is health-conscious, and is careful with what she consumes, “especially regarding the quality and sourcing of the primary ingredients.” As is customary in her homeland and other places, people ask about the source of their food.

“I want to know where the food comes from and for example for meat, in what conditions the animals were reared, for vegetables and rice if the producer uses organic and environmentally friendly farming methods, for eggs if they are free-range, etc…,” she explained.

One time, she ordered chicken rice at a stall and asked the vendor where the ingredients had come from, how they had been grown and if the producers were known to her. While she did not mean to offend, the hawker got “really angry and started scolding at me in Singlish.” The French student ended up not understanding what the hawker said, but she took it to mean “you are insulting me and my food, and if you are not happy, you can go find food elsewhere”.

Because she was so puzzled at the vendor’s attitude, she wished to know if she had come across as rude, explaining that in France, even in small establishments, these questions are not perceived as rude, but “quite the opposite, as it shows the chef that you are interested in his work and appreciating his food by wanting to know more about it, and he/she will happily tell you about it.”

She added that she sees that food culture is important to Singapore as it is to France, but that “Singaporeans don’t pay a lot of attention to the origin and quality of the primary ingredients, which is a paradox to me as from good ingredients results tasty and healthy food,” and signed off as “a French girl who loves Singapore, Singaporean food, and NUS!”

While there were a number of commenters who poked fun at the French student, the majority answered her question directly.

One pointed out that in all likelihood, the vendor simply did not know where the ingredients came from

Others endeavoured to teach her about Singaporean culture

Another French person also endeavored to help her out 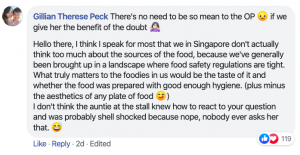