The Independent News
Home News Netizen apologises to K. Shanmugam after minister asks in post if his...

“MinShan, there was zero intent in racism here and I apologise if you or any other people are slighted by that statement," said Nubela Goh

This resulted in the netizen issuing an apology to Mr Shanmugam.

On Dec 10, the minister published a ‘heartfelt’ letter from a former cannabis user who had thanked Mr Shanmugam for keeping Singapore safe as well as offered to help educate the youth regarding the misconception that marijuana is harmless.

He had seen an article in CNA wherein the Minister had expressed his perspective on the decision of the United Nations to remove cannabis from the most tightly controlled category of narcotic drugs.

CNA quoted Mr Shanmugam as saying, “I put this down to the power of money. Companies see a huge amount of profit and a very invidious idea that cannabis is not harmful is being pushed. But the evidence that it is harmful is quite substantive.”

Many commenters voiced their support for the Government’s stand on cannabis, as well as commended the letter-writer.

But there was one comment that Mr Shanmugam took exception to, from a netizen calling himself Nubela Goh. When one person commended the letter-writer, Mr Goh chimed in, “Have you tried weed? If not, I think you might be the ignorant one gaslighted by a black man wearing white.”

This was screenshot and then posted on another Facebook page called Gong Simi Singapore, along with a photo of Mr Goh, information about the company where he is the CEO, as well as a photo of him and a young boy. The post carried the caption, ‘Racist CEO called Indians ‘black man.’ Called others ignorant who never tried weed. Discrediting others who tried and warn others against it (sic).”

On Dec 12, Mr Shanmugam also posted a screenshot of Mr Goh’s comment, and asked followers whether or now they thought the comment was racist.

Wonder what Singaporeans will think of the reference to ‘gaslighting’ by a ‘black man wearing white’ – which appears to be intended to be derogatory.

Would people think this is racist? Or not?” A large number of the more than 500 people who answered Mr Shanmugam’s question said they believed the comment had indeed been racist.

Later, Mr Goh apologised to the Minister, writing, “MinShan, there was zero intent in racism here and I apologise if you or any other people are slighted by that statement. No ifs/buts on that apology.”

He endeavoured to explain his intent, and then re-word it so that it would convey what he really meant.

“For clarity: I literally said ‘Black man in a white shirt’ to highlight the fact that he is speaking for the PAP. It stands out. What I was trying to highlight is the WHITE SHIRT.

If you put it into context sans the figure of speech, what I’m trying to say can be distilled down into this: ‘Have you tried weed? If not you might be the ignorant one gaslight by _someone who speaks loudly for PAP_.’”

Mr Shanmugam also posted a screenshot of this comment. 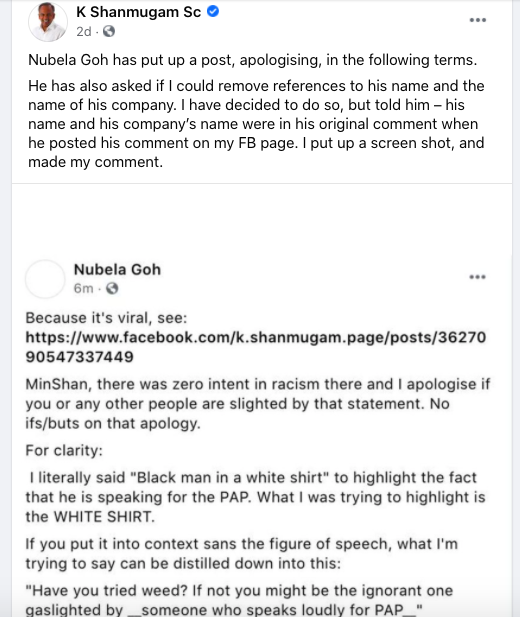 The Minister added that Mr Goh asked if the referenced to his name and company where he works could be omitted.

“He has also asked if I could remove references to his name and the name of his company.

I have decided to do so, but told him – his name and his company’s name were in his original comment when he posted his comment on my FB page. I put up a screen shot, and made my comment.” —/TISG