The Independent News
Home News National media in 2018 and beyond

National media in 2018 and beyond 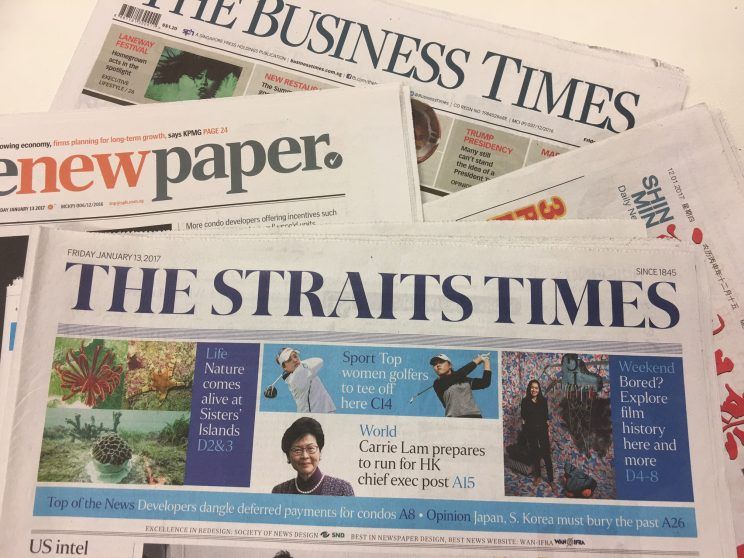 Singapore media’s future saw two silver linings this year. The most intriguing ray of light came in the form of a commentary by Chua Mui Hoong in the Straits Times which explicitly said why the government should give the media some leg room to manoeuvre its way out of a digital squeeze. Here is what she said : Singapore benefits if it has a local media staffed with journalists and editors who are able, willing and given the room to push the boundaries.” And this: “We …need a relationship with stakeholders that allows … robust content to be created, and a state that does not use its considerable influence, resources and enforcement powers to box the local media into a corner.” Never before have I seen a ST commentary make such a clarion call to the government, which has controlled the paper by diktat.

Chua is trusted by the establishment. This trust gives her the licence to push the out- of-bound markers in a way that will not be frowned upon by the government. When she makes a plaintive cry like this, it must show that something is really stirring in the media scene. Can Singaporeans hungry for a responsible, intelligent and robust media expect a spring of sorts in 2018? The government is caught in a policy paralysis: Allow a gradual freeing up of the media and face the risk of undoing the benefits of an age-old policy, both covert and overt, of controlling the message to Singaporeans. Or continue to keep the tight-fisted controls and risk the possibility of eyeballs deserting ST and MediaCorp and further reduce the usefulness of its most important channels to reach the people.

With an election coming up and a new team yet to be finalized to run the country, don’t expect drastic changes to the media scene. The government and media will just pussyfoot its way through in 2018 and beyond and leave the media to the mercies of the market place. The government might calculate that times are not desperate for it to introduce some major U-turns in its media policy. SPH is still a very rich company with annual revenues of $1 billion and Mediacorp is comfortable with government money flowing in without much of a hassle. Singapore had a brief romance with media for 14 years from 1990 when Goh Chok Tong was PM. His government “understood it was not in its own interests to crush the national media’s credibility underfoot,” according to academic Cherian George in his new book, Singapore, Incomplete.

In 2000, when Goh was PM, the Today paper bet on him to give it some leeway in introducing a different kind of reporting. Analysis in news reports was not frowned upon and that allowed the paper to gain some momentum. Things changed once Lee Hsien Loong took over in 2004 with phone calls by the PMO to the Today newsroom regularly.  It is unlikely that the fourth generation leadership will want to change track.

The other silver lining has a better chance of happening. With both SPH CEO and ST editor announcing that the company is prepared to give up the Old Order articulated by the former man in charge of marketing, Leslie Fong, and backed by the then CEO, Alan Chan, of maintaining the supremacy of print above everything else. The intention to change course might just be a situation of too little, too late. Freed from its print mindset, one can expect digital content to get more play. In a memo to staff, editor Warren Fernandez wrote about getting more exclusives, improving ST foreign coverage and journalists given more time and scope to chase ideas or projects across platforms.

That is something to look forward to in 2018.