Naz had said on his vlog “I blame us.” ...scientifically speaking, this virus came from us eating animals”

Singapore—Travel vlogger Nuseir Yassin, know worldwide for the short videos he posts daily, usually gets a lot of love online for the positive messages in his videos, but his latest one, wherein he says he holds meat-eaters to blame for the coronavirus crisis, has gotten a lot more flak than usual.

Nas, as he is popularly known, seemed to be prepared for the pushback, as the caption to his latest post, which came out on Sunday (May 17), opens with “I know this video will get a LOT of opposition.”

In the video, which is entitled “Who I blame for COVID-19,” the vlogger says that he blames neither China nor President Trump for the current coronavirus, which has caused both a health and economic crisis around the world.

Instead, he says, “I blame us.” And by us, he specifically means meat eaters, since he says that “scientifically speaking, this virus came from us eating animals.”

Rather dramatically he explains that when he looks at an animal, he doesn’t think “delicious” or “cute,” but “virus,” since animals have millions of viruses inside them, each one of which “can kill” us.

This fact bothered Nas so much that he decided to become a vegetarian. He added that if people do want to eat meat, they should choose “clean meat” from sustainable farms since overcrowded and unsanitary farms are just as susceptible to disease as the wet market in Wuhan where the virus is believed to have originated.

Nas says that “our luck has run out” with millions infected and millions of dollars lost. We have gone back 10 years in eradicating poverty. And even non-meat eaters, or those who buy clean meat, “all die because of the irresponsible actions of a few.”

Netizens found many problems with Nas’ arguments in the video and were alarmed that he may be spreading fake news.

One said that the virus had come about through researching bats, and not eating bat meat.

Some netizens urged Nas to “stick to travel videos.”

Another netizen wrote that Nas is not a nutritionist, and that meat and fish are important for development

And there were yet other netizens who pointed out that some pathogens come from vegetables, such as the romaine lettuce where e.coli was found last year, or that improperly cooked vegetables can also cause illnesses.

Another netizen argued that it’s not eating animals in itself that’s the problem, but the neglect and greed in farming them. 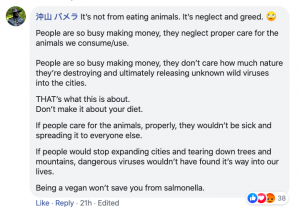 Nas responded to one comment and said that if it is proven that “HIV and COVID-19 didn’t originate from animals,” he would issue an apology and delete the video.

Read related: Criticism against Nas Daily continues despite Govt’s assurance that he did not breach circuit breaker rules