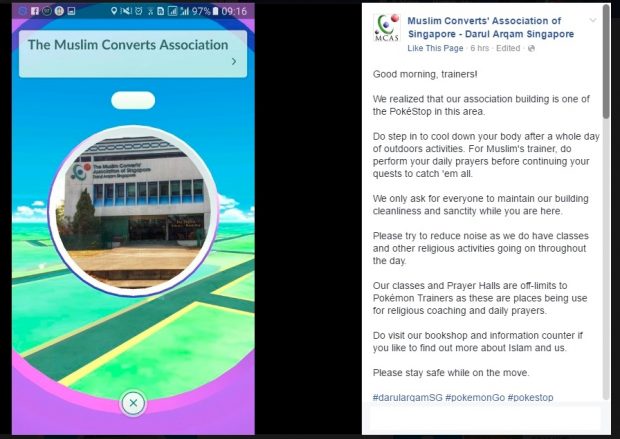 Pokemon GO has finally arrived in Singapore and our streets have been filled with players walking with their eyes on their screens. Social media like Facebook and Twitter have been abuzz with users boasting they have caught this and that Pokemon characters.

So pokemon go is released in Singapore…. pic.twitter.com/K68L9hPl7w

A Pokemon GO player’s hunt even led him to a grisly find at the Woodlands Waterfront Park today. He claimed that he saw a floating body in the waters (https://theindependent.sg.sg/pokemon-hunt-leads-to-grissly-find-in-woodlands).

Amidst all such hype about the game, one post especially stood out. The Facebook post by Muslim Converts’ Association of Singapore – Darul Arqam Singapore. The Association posted a picture of its building being listed in the Pokeshop and said:

“Good morning, trainers! We realized that our association building is one of the PokéStop in this area.

Do step in to cool down your body after a whole day of outdoors activities. For Muslim’s trainer, do perform your daily prayers before continuing your quests to catch ’em all.

We only ask for everyone to maintain our building cleanliness and sanctity while you are here.
Please try to reduce noise as we do have classes and other religious activities going on throughout the day.

Our classes and Prayer Halls are off-limits to Pokémon Trainers as these are places being use for religious coaching and daily prayers.

Do visit our bookshop and information counter if you like to find out more about Islam and us.
Please stay safe while on the move.”

The Singapore Muslim Converts’ Association’s post and view on the popular game is very different from that of a Malaysian Mufti. The Malay Mail Online reported last Friday that the Islamic Legal Consultative Committee in the Federal Territories, which is chaired by the Mufti, said that Pokemon Go is banned for Muslims.

The Committee said that besides taking into account the purported ill effects of the phenomenally popular augmented reality smartphone game, its decision was made on August 1 based on scripture and for the benefit of Muslims, .

“Therefore, it’s hoped that Muslims, especially those in the Federal Territories, are not involved in the gaming app,” said the Islamic Legal Consultative Committee.

The Mufti, Datuk Dr Zulkifli Mohamad al-Bakri, said that fatwas or edicts issued in other countries, such as the one in 2001 by influential Egypt-born cleric Dr Yusuf al-Qaradawi against Pokemon, had basis and that ‘Pokemon Go’ and Pokemon must be avoided as the games were harmful.

“Besides that, it also affirms powers and the powers of certain gods, plus it can lead to gambling. Therefore, we believe that the arguments about how playing Pokemon is ‘haram’ have strong grounds,” Zulkifli reportedly said.

Another Mufti, the Mufti of Perak has asked the Malaysian Government to ban Pokemon GO, but he himself has not issued a fatwa. The Penang Mufti on the other hand said that although he does think that the game has more harm than good, he is not banning it for Muslims yet.

The Singapore Mufti has not issued any such edicts.

Assoc Prof Dr Yaacob Ibrahim, Minister for Communications and Information and Minister-in-charge of Muslim Affairs, has however said that: “We have to study very, very carefully whatever that is brought into Singapore … We will monitor the situation, how this particular game is being played and … its impact on society … And if it’s really something which we should be concerned about I think MDA will definitely decide on what are the things we can do best, if the game is really needed here, how… we can do it in such a way that it becomes a win-win situation.”Follow us on Social Media