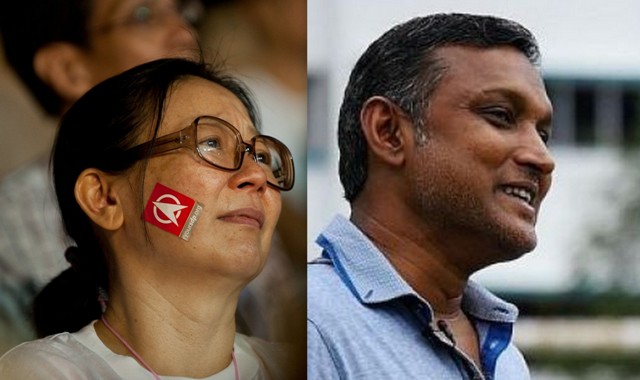 Candidate of People’s Action Party (PAP) Murali Pillai has earned the support of local soccer icon V Sundramoorthy. In the endorsement video shared in Murali’s Facebook the sports icon reminisced about the time he and Murali played football together and said that he was sure of the capabilities of the lawyer to be a good town councilor.

There was a time when people of prominence were unsure about associating themselves with the Singapore Democratic Party (SDP) and its secretary-general, Dr Chee Soon Juan.
In 2013, local soccer legends Fandi Ahmad and Terry Pathmanathan spoke out strongly about being bypassed by the Football Association of Singapore (FAS) in favour of foreign talent.
When SDP used the soccer icons’ plight as an example to point out how the political party’s policies will better help local talents like them, the former footballers took issue with SDP for using them as such.
Mr Pathmanathan reportedly said, “I’m taken aback they are using me as an example to (convey) their own political message.”
The former Lions skipper, who was nicknamed Captain Marvel, added: “I don’t know whether to laugh or get all worked up. They should not (use my example) to exploit the system or make a political point.”
The New Paper reported then that the favourite son of Singapore soccer, Fandi Ahmad, was considering legal actions against the political party. But Fandi did not take any such actions against SDP.
The political party’s article had merely explained how SDP had drawn up workable solutions that focus on helping Singaporeans and raising their quality of life as opposed to policies that are oriented towards profit-generating for the PAP Government. (see this: http://bit.ly/1WSKWCk)
The tide has however turned for SDP. Prominent people and celebrities are not only no longer afraid of being associated with the Party, but have begun endorsing them on public platforms as well.
Two of the people who have publicly endorsed them are Phua Chu Kang fame Neo Swee Lin and Lim Kay Siu. Neo played the role of ‘Ah Ma’ in the tele-serial while Lim was cast as the villain, ‘Frankie Foo’.

Neo was part of the ensemble from Wild Rice’s production Hotel which won this year’s M1-The Straits Times Life Theatre Awards. In her thank-you speech the theatre company’s actor said almost tearfully that “in a perfect future, I would like to see more opposition in Parliament”.
“Now is the time to give Dr Chee a chance,” the actor ended her Speech.
It is one thing to be featured in a political video to endorse a political party’s candidate and quite another to go on a public platform in party colours to ask citizens to vote for a particular candidate. That is what Neo has done.
In elaborating further on why she did what she did at the award function, Neo said:

“This year’s Life Theatre Awards theme was “Future Perfect”. Lim Kay Siu and I went dressed in SDP colours, because for us, a perfect future for our country would be one where there was more opposition in Parliament. I thought long and hard if this was the right platform for this. I think it is. What other platforms do we have? (what do YOU think?)

As artists, we should stand up for what we believe in. I learnt from playing Teo Soh Lung in Cooling Off Day that everyone should be involved in politics, that we should be unafraid. Life, Art, Politics are all part of the human experience.

I shed tears when I spoke to Guest of Honour Baey Yam Keng (MP for Tampines) at the after-party, because I felt a little bit chastised. He was kind, but felt that this was not the right platform for what I did. I’m still not sure if he is right.

All I know is, I am very passionate about my beliefs, and I hope that the voters in Bukit Batok will do the right thing. Be brave! You have a beautiful estate, I visit it often because my late mother’s ashes are interred in Bukit Batok, I am a stone’s throw away.

I have no doubt Murali is a good man too, but now is the time to give Chee Soon Juan a chance. He will do good for you, I promise you. I believe in him. You should too.”